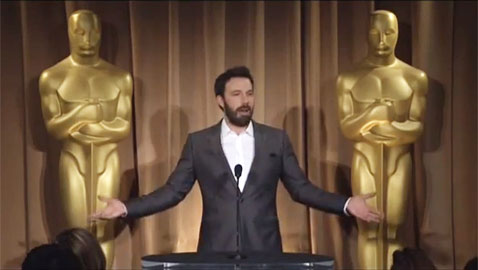 Ben Affleck: Affleck did indeed win Best Director on Jan. 2 at the 65th annual Directors Guild of America Awards ceremony, which means by now he’s won pretty much everything he can and might just keep on doing so right up to Best Picture at the Oscars, even though he can’t take the directors award there … because, of course, he wasn’t nominated.

So Marian Salzman over at Forbes looks at Affleck’s amazing series of wins for “Argo” and the rampant pursuit of him as director and star in a range of projects (including being asked not just to direct “Justice League” but to be its Batman, apparently) and still wonders, “Why Can’t Ben Affleck Fix His Personal Brand?” She even says Affleck is “floundering.”

This seems like a desperate and not very well supported stab at contrarianism. Arlington’s Steve Almond does a better job on WBUR’s website on his “6 Reasons Why Mr. Affleck Should Go To Washington,” even though Affleck has already said no to a political career.

Matt Damon: The buzz is good about Damon’s appearance on Showtime’s “House of Lies” and The Boston Globe is essentially defending the hometown favorite against Johnny Depp – who’s cast as James “Whitey” Bulger in “Black Mass” against Damon’s performance in an untitled Bulger film he’s making with Ben Affleck.

Yet the reviews as Damon brings his “Promised Land” to the Berlin Film Festival aren’t better than they were here. The U.K. Independent, for instance, calls it “contrived” as well as “ultimately just a little too dry and sober.” In an Agence France Presse story on Business Insider, Damon seems upset:

I’m leery of becoming one of those people who lives so much in a bubble, who thinks that everything I do is great. But with this one I just really love it and a big part of my heart is in it …   and I don’t understand what I’m hearing back.

Passion Pit: This past week people looked at Passion Pit and asked “How?”

How does the band work as a “Michael Angelakos project,” in which Cambridge’s Angelakos writes and records the albums and the band joins to play live? How does playing Saturday Night Live work, especially when you’re on tour in Australia at the time? (The Portland Press-Herald has the answers.) But Spin has a totally reasonable question of its own: “How Are Passion Pit Playing Madison Square Garden?” Meaning how does a band go from theaters to arenas in one step? It turns out first you stay away for a while (except for playing SNL, of course). Then you put in a stage, which knocks out about 6,000 seats from a 18,000 total. Then you plan to play only 180 degrees of a 360 degree theater and expand as seats are sold and more space is needed. “We’re up to 220 degrees and we’re going to 240,” said Rich Cohen, the band’s manager.