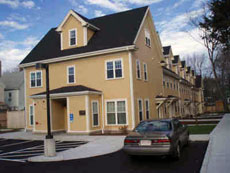 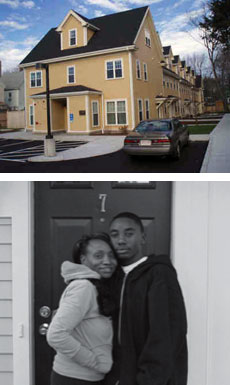 A Massachusetts Avenue condo owned by Lejuanna Harris could lose its affordable status if Boston Private Bank & Trust forecloses on it.

Lejuanna Harris was so overjoyed to win a city lottery for a three-bedroom affordable condominium in North Cambridge that she gave her children keys to the home as Christmas presents. Now, six years and three bankruptcies later, Harris faces foreclosure and Cambridge could lose the right to keep the unit affordable.

Boston Private Bank & Trust, which has the first mortgage on Harris’ Massachusetts Avenue condo, has filed a foreclosure notice on her. In a bankruptcy court filing, Just-A-Start said the agency and city “could lose rights” to keep the unit affordable if the bank forecloses.

Some 820 affordable housing units are set to expire in roughly the next seven years, according to a December report from the City Council’s Housing Committee. The city is working to preserve them and add units to the stock.

Community Development Department housing director Christopher Cotter wouldn’t answer specific questions on the case because it’s in litigation, saying only that the city works with owners of its deed-restricted affordable housing properties to avoid foreclosure.

Because of officials’ reluctance to comment, it’s unclear how often units face elimination from the rolls of low- and moderate-income housing by foreclosure.

The Harris case raises questions about how carefully the city and its nonprofit housing developers check buyers’ qualifications. Harris and several family members owned a single-family home on Upton Street in 2007 when she won the lottery for her affordable condo. (The family’s arrangement for the Upton Street home has since been changed so Harris can’t exercise ownership rights until after one of the relatives dies). The home at 20 Upton St. is assessed at $455,800.

Harris enlisted the help of former city councillor and state Sen. Anthony Galluccio during her second bankruptcy. While he was involved, the city went to extraordinary lengths to help her ward off foreclosure.

The Community Development Department authorized Just-A-Start to lend Harris $16,186 to pay her back condo fees and the association’s legal costs, preventing the association from foreclosing on her unit. A copy of the city’s Jan. 31, 2011, letter offering Harris the loan was sent to Galluccio at his Cambridge law firm, and Harris’ bankruptcy attorney, Michael Van Dam, said in a bankruptcy court filing that Galluccio represented Harris in negotiating the loan.

Harris’ daughter says on her LinkedIn profile that she worked for Galluccio for part of 2007.

Galluccio didn’t return a phone message left at his office. The Just-A-Start loan is in default, along with Harris’ other obligations.

Harris, 40, a single mother, was paying market rent for a Cambridge apartment when she won the right to buy the Just-A-Start condo at 2497 Massachusetts Ave., according to an article about the affordable homeownership program in the City Manager’s Spring 2007 newsletter. She paid $195,000 for the unit in January 2007 and said her mortgage payments were lower than her previous rent.

But Harris soon fell behind on her mortgage from Boston Private Bank & Trust. She also didn’t pay her condo fees, although she had been appointed a trustee of the condo association at Just-A-Start’s Gateview Condominiums.

Harris, who also goes by two other names, Starr Harris and Lawanna Harris, filed her first petition for bankruptcy in November 2009, trying to avoid losing her home while she worked out a deal with the association, the bank, her car lender and other creditors. A former bank employee, she was living on $2,900 a month in disability payments and child support and incurring about $2,500 a month in expenses, including the loan payments, bankruptcy court papers said.

When she didn’t make the monthly payments she promised to her creditors, a judge dismissed the case. But Harris escaped foreclosure by filing another bankruptcy petition within a few days, in July 2010.

Again a judge dismissed the petition because Harris failed to make the payments she promised, and Harris filed her third bankruptcy case in January 2011. Again Harris didn’t come up with the required payments, and this time she may have run out of options.

Harris filed under Chapter 13 of the bankruptcy code, which protects borrowers from creditors while they makes regular, agreed-upon payments to the lenders to pay off a debt gradually. Now the case is under Chapter 7, which calls for liquidation of assets to pay off the debt.

Harris remains in her condo and her bankruptcy case won’t be closed officially until she attends a financial management course, required by bankruptcy law. Boston Private Bank has not acted on its notice of foreclosure. When visited last week, Harris declined to comment.