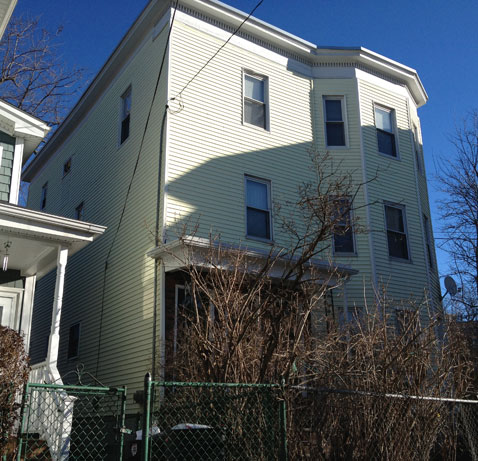 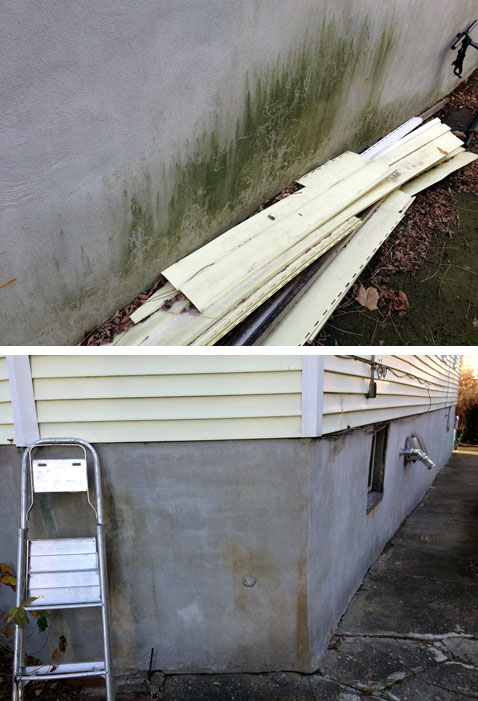 The triple-decker home at 48 Kinnaird St. is bulging slightly on the left, lifting off its foundation to the right and in imminent danger of collapse, according to reports by a structural engineer cited in a court case against the Just-A-Start Corp. charity. (Photos: Marc Levy)

With her house on Kinnaird Street sinking around her, Shirley Graham saw the Just-A-Start Corp. as a savior, but the program’s failed attempt at repairs may cost her the home completely.

A Monday date in Middlesex Superior Court in Woburn could tell her if she’s losing her home of 41 years after asking the charity’s help for repairs to her foundation in May 2004 – work that left her home “in imminent danger of collapse,” according to a structural engineer who examined the house Dec. 11.

Repairs and rehabilitation are what Just-A-Start, based at 1035 Cambridge St., does. As a nonprofit, tax-exempt community development agency incorporated the same year Graham got her home, Just-A-Start says it works to help low- and moderate-income people mainly through education, training and job placement activities; development and operation of affordable housing; and “stabilizing” occupied housing.

That home rehab program, according to its own website, uses state money and federal Community Development Block Grants to provide up to $50,000 to homeowners with loans at zero to 3 percent interest, then helps prepare plans and construction specs and provides its expertise in the contractor bidding process and in “monitoring the renovation.” In Graham’s case, though, there were three contracts that took her from $40,000 in structural work to adding $25,000 in replacing heating systems and hardwood floors and a final $10,000 in interior carpentry, painting and basement masonry work.

As it says in the three accompanying releases Graham signed, the $75,000 in loans “will be secured by a mortgage on [the signer’s] property.” That means it’s Just-A-Start that is trying to foreclose on Graham for nonpayment.

“By far the worst”

Attorney Richard Clarey said he has seen a handful of similar situations in North Cambridge dating back 10 to 15 years, but on Friday, showing legal documents about the case, he called Graham’s “by far the worst.”

“It’s an absolute hosing of poor people,” he said, “and fleecing of old people.”

He is helping Graham with her case and, because she is constrained by a confidentiality clause, speaking on her behalf, he said.

Alan LaBella, deputy director of housing at Just-A-Start, said he also could not speak while the case was in court.

With neither plaintiff nor defendant speaking, it is unclear why the first contract was for $40,000 if the estimate for the work was $19,000, as Graham said in her legal complaint. Her lawyer, James P. Keane of Charlestown firm Keane, Klein & Duffey, wrote in that complaint it was done “at their solicitation” but wasn’t on hand to clarify Friday. The “two additional mortgages were required and solicited by Just-A-Start,” according to Graham’s legal complaint, while LaBella has said Graham came to Just-A-Start to ask for the additional work. Either way, Graham wound up with three 20-year loans at 3 percent interest while work began.

The foundation was bad under the 48 Kinnaird St. triple-decker, built in 1916, when the Just-A-Start workers arrived, but they shored it up unevenly, literally dropping the house so it tilts subtly, bulging on the left and visibly lifting from the foundation on the right. “It moved. She was in it when it happened and the whole house fell by inches,” Clarey said. “One expert says it could collapse any minute. An engineer said it in 2006 and repeated it two weeks ago.”

That expert – Rene Mugnier Associates at 777 Concord Ave. – confirmed in a document provided by Clarey that its engineer visited Graham’s home three times, starting with visits in May and August 2006, and was recently “very concerned that the recommendations given by our office more than six years ago have not been implemented.” Its report cited joists that were too long and badly broken, improper supports and missing bolts. Mainly the report complains that a center I-beam girder was installed, “but no second line of bearing,” leaving walls buckling and generally “dangerous conditions.”

Fixing this, according to an estimate in a corroborating legal file by construction contractor Charles J. Costello of Boxford, would cost $65,938.

“Whatever happened at that house has made my city more dangerous,” said city councillor Craig Kelley, who has worked with Clarey in the past on issues related to Just-At-Start. “They’re leaving a house in my city in danger of at least partial collapse. A gas line could rupture, a fire could start and all of a sudden you lose six houses. It’s not likely, but it’s not outside the realm of possibility.”

Graham, who said in legal documents she had been generally unhappy with the workers’ lack of professionalism in 2005, didn’t know until spring 2006 that the home was unbalanced, and she found out only by chancing across one of the contractors in the neighborhood; he let it slip during their conversation. LaBella’s affidavit said that when she complained in May 2006, he tried to get the contractors back to fix the problem, but she would not let them back in.

There are two other key mismatches in the cases presented by Graham and Just-A-Start:

LaBella said homeowners are first asked if they have companies they want to work with. If they don’t, he brings forward the agency’s list, he said.

That’s not what happened with Graham, according to Clarey.

The road to court

Graham approached Cambridge and Somerville Legal Services and later city councillor Denise Simmons for help, but over time each was stymied, Clarey said. Finally she went through AARP, the advocacy and services group for those 50 and over, and was connected with Keane, Klein & Duffey. In the meantime, the clock had been counting down on the contractors’ one-year warranties and a three-year statute of limitations; Graham squeezed her case in based on a four-year consumer protection statute, but the individual contractors have been dropped from the case.

One has even disappeared: R.E. Traniello Plumbing and Heating, of Natick, has gone out of business. Before that, Keane said in a legal document, proprietor Ralph Traniello had taken the step of transferring a $520,000 property to his wife for a dollar.

Graham took Just-A-Start to court in March 2009, winning a temporary restraining order against foreclosure. When she and Just-A-Start officials returned to court the next month, Judge Thayer Fremont-Smith blocked foreclosure indefinitely while the case went to mediation, where Clarey said Graham was pressured by a mediator and even her own lawyer to sign over her mortgage to the charity and get $46,000 in return.

Graham insisted on thinking it over, though. Even in its poor condition the house is assessed at $653,400 and Keane, according to Clarey, started by asking for $600,000 from Just-A-Start.

A trial by jury expected to take place in August was canceled because the settlement was offered, but Graham is rejecting that offer of $46,000, some of which would go to Keane, according to Clarey.

In Clarey’s assessment, Just-A-Start doesn’t mind going to trial because “they’re using your money and mine. It’s not like it’s a private company that has to worry about money going in and out. They have no risk at all.”

Cases such as Graham’s don’t usually get as far, Clarey said, because by its very nature Just-A-Start is immunized by being a nonprofit charity and working with poorer people who don’t have the resources to fight when something goes wrong.

“She’s a very courageous lady who needs the support of the community,” Clarey said of Graham.