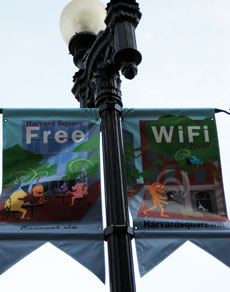 The citywide Wi-Fi dreamed up nearly a decade ago never happened – the city provides it mainly in public buildings and parks – but Harvard Square is better equipped than ever, with the rollout of a more robust system announced Friday by the Harvard Square Business Association.

The association contracted with Boston-based One World WiFi, which installed Aerohive devices in wireless access points throughout the square, according to an announcement describing the first major overhaul since the square’s wireless network launch in June 2008.

There are more than 8 million visitors per year to the square touted by the association. Its tipoff better Wi-Fi was needed: More than 25 percent of visitors to the association’s website are using a mobile device, and the number is rising every month.

“While our previous system worked well, it is imperative for us to keep up with the growing demand for Wi-Fi and all that it entails,” said Denise Jillson, executive director of the association. “As a society, we have come to expect public Wi-Fi. Our association directors and officers believe that it is no longer a luxury, but view it as a necessity … as readily available as electricity and cellphone service.”

“We invested in and are prepared to maintain a Wi-Fi network system that will be enjoyed by the public for years to come,” Jillson said.

As with the first deployment, the association worked with city government, Harvard University and association members, who allowed the Aerohive signal devices onto their rooftops and into their basements. This time, though, the association claimed another partner: Google, which has offices in Kendall Square.

The suppliers of the technology applauded the association for leading the effort.

“As mobile devices become ubiquitous in today’s society, public Wi-Fi has increasingly become a need for consumers, but the majority of cities have yet to supply this,” said David Flynn, chief executive at Aerohive Networks. “Harvard Square has placed itself ahead of the curve in realizing the need.”

Brendan Burroughs, president of One World WiFi, said the rollout puts Harvard Square “at the forefront of locations around the country who embrace Wi-Fi as a means to connect their public to local businesses and to each other.”