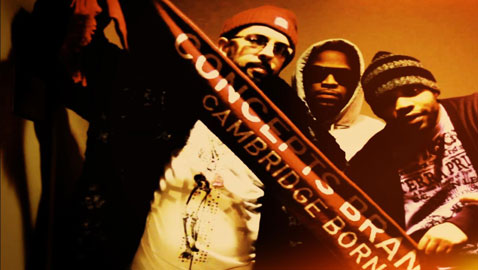 Cambridge hip-hop group N.B.S. was on WERS-FM’s [email protected] show Tuesday, and E’Flash and V-Knucks had plenty to talk about.

For starters, the group is headed back to Europe to tour behind “The Dispensary,” the album it released in November. The tour starts March 22 in Budapest and moves on to London; Madrid and Barcelona; Saint-Étienne, Lyon and Rennes in France; and ends in Geneva on April 6 – just enough time for the members to get back to Cambridge for an April 11 show at The Middle East Downstairs.

One of the highlights of “The Dispensary” (in addition to the swinging, heartfelt “The Essence of Real Rap,” above) is “Turn Up the Heat” and its accompanying video. In it, N.B.S. features Checkmark, of Skitzofreniks, and Virtuoso, huge contributors to the area’s hip-hop scene, with a key part of the video – actually the only part not filmed in Cambridge – being from the funeral of Erik Brown, the producer half of Skitzofreniks.

“Skitzofreniks was a huge force in the late ’90s/early ’00s and was instrumental in setting the stage for Virtuoso, N.B.S. and Termanology,” said Brian Shirley, vice president and director of new media and promotion at Big Bang Records, N.B.S.’ label.

Aside from that, Shirley said, “It’s all Cambridge, through and through.”

The WERS-FM show starts at 10 p.m. It’s at 88.9 on the FM dial or you can stream it on iTunes or Windows Media by starting at the WERS website.

This story was updated March 13, 2013, to reflect that the live appearance took place.