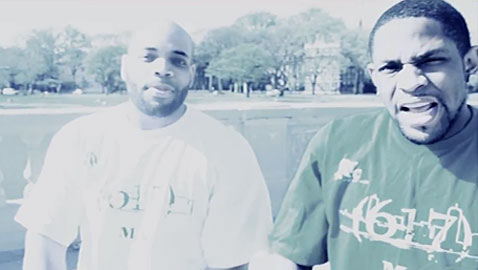 The hip-hop group N.B.S. has partnered with French DJ Jean Maron on a song called “The Bridge (Cambridge)” or “Cam(Bridge),” including a video contrasting literally colorful images from genteel city spots such as Harvard Square — people playing chess, a violinist busking — with shots of public housing in sudden, chilly shades of blue, separated by an explosion and black and white lettering welcoming watchers “to the other side of Cambridge.”

Rappers E’Flash and V-Knucks literally bridge the two sides, rapping in both and even appearing unexpectedly in images thought passed: At the start of the video there are carefree guys in shorts jumping from a bridge to swim in the Charles River; in the second pass, E’Flash and V-Knucks are present singing in front of — but not taking part in — the fun.

It’s a great tune, full of gangsta swagger that would be more entertaining if not for the memory of the drive-by shooting that killed Charlene Holmes, 16, in early June. It makes it chilling to hear lines about how in Cambridge “the coroners will start their moppin’ /And your fam will come through just to watch your coffin.” And describing the city as “the ’bridge right across from Boston / Where them snitches can’t come, better watch your talkin’” is depressing when contrasted with discussion that one reason there’s been no arrest in the teen’s death is a reluctance on the part of the neighborhood to give information to police.

The members of Natural Born Spitters, represented by Cambridge-based Big Bang Records, came from Roxbury as kids and went off to college — Imam Bilal-Firmin (E’Flash) to Morris Brown College in Atlanta and Rahim Muhammad (V-Knucks) to Howard University in Washington, D.C. — before releasing a debut album in 1999. They drew attention in the summer of 2009 for a hard look at the players in the arrest of Harvard professor Henry Louis Gates Jr., knocking Gates for being uninvolved in the city but Cambridge police even harder (“When I see Cambridge police I get butterflies / Wanna see the pain they cause, look in my mother’s eyes”) in a song called “CPD.”

Still, N.B.S. is certainly not all about anger. They followed up “CPD” with “Who are We? (The Celtics!),” which was meant to be a street anthem for the Celtics as they took on the L.A. Lakers in the 2010 NBA playoffs. And “The Bridge (Cambridge)” is also cited as a playful callback to the classic 1985 song “The Bridge” by MC Shan and Marley Marl, which praised the borough of Queensbridge, N.Y., and inadvertently started a rivalry known as The Bridge Wars when South Bronx rappers thought MC Shan and Marley Marl were claiming Queensbridge as the birthplace of rap.

N.B.S. has also been touring Europe this month as part of Hip-Hop Kemp, scheduled to hit Paris, Amsterdam and the Czech Republic in shows with the venerable Snowgoons troupe. After a rough patch — their baggage didn’t arrive with them at the Prague airport, V-Knucks said — the Aug. 18 show in Hradec Králové, on festival grounds an hour east of Prague, sounded like a triumph.

“It’s exciting. We’re happy to be here … we’re making history here,” E’Flash said. “I feel very blessed. This is so worth it for our career. We’ve been doing this for a long long, and to be here at the hip-hop camp with the Snowgoons and the Goon music family, this is a blessing first and foremost.”

“People are loving us,” he said. “I met so many people already that already knew who we were and what we were about and were happy to see us perform on Saturday.”

“The Bridge (Cambridge)” is available in three versions on iTunes.