Who’s funniest? On this episode of Katz’s ‘Explosion Bus’ series, it’s kind of a draw 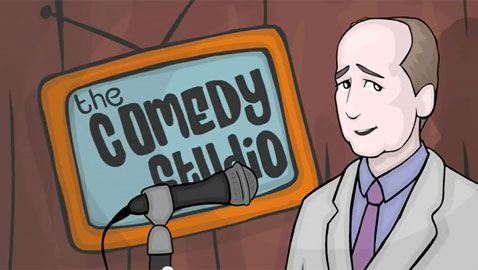 Who’s funniest? On this episode of Katz’s ‘Explosion Bus’ series, it’s kind of a draw

The animated Web series “Explosion Bus” already had plenty of local talent – including voiceover work by Cambridge comedians Matt D. and Misch Whitaker – but the episode out today turns the Cambridge up to 11. (Which sounds good until you realize it’s on a scale, described in the show, of 1 to 100.)

This episode starts at an animated version of the Cambridge Common restaurant and bar and travels to Harvard Square’s Comedy Studio, atop the Hong Kong restaurant, for a joke-off judged by the club’s real-life founder and tyrant Rick Jenkins.

With “Explosion Bus” on only its 12th episode, people may be more familiar with its long-lost parent show: “Dr. Katz, Professional Therapist,” which ran from 1995 to 2002 on Comedy Central. It too was founded by local comedian Jonathan Katz and used comedians as voice actors and story material.

“We record episodes at Jonathan’s house with a small group of Boston’s best improv actors, and then the episodes are edited, animated and produced in my home, the same place where we made ‘Dr. Katz,’” creator and director Tom Snyder says on the show’s website.

Since the idea of the Explosion Bus is that it’s a roving talent search and contest, fans are invited to send video of themselves displaying a silly talent. Some get featured (in video, not animation) at the end of each episode.