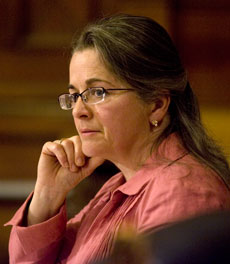 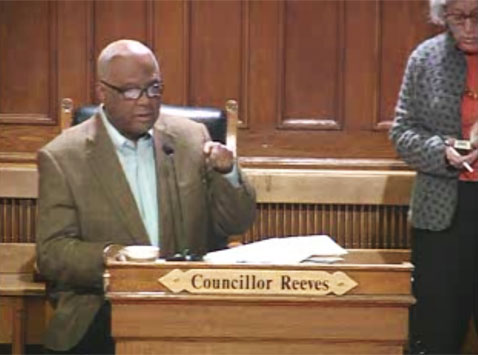 Councillor Ken Reeves confirms that City Council roundtables can be televised with councillor David Maher, offscreen, at at March 7 meeting of the council’s Ordinance Committee, just before voting to move an issue to roundtables. Click the image for video of the exchange.

A city councillor is asking to break a sacred rule and televise a “roundtable” session. Surprisingly, two previous foes of the idea have said publicly that it’s possible.

Councillors get the chance to learn more about the Massachusetts Institute of Technology’s plans to remake 26 acres in Kendall Square at a 9:30 a.m. Friday meeting of the council’s Ordinance Committee. It’s been declared a “roundtable,”and the council’s rules say a roundtable can’t be televised, include votes or take public comment.

(A second roundtable on the plan is scheduled for 5:30 p.m. March 27. Councillors were also to get individual sessions in the past week with city planners and experts on the proposal.)

“There’s something magical about when the cameras get turned on,” councillor Marjorie Decker has said in explaining how having a video record of their conversation impedes councillors’ ability to either get or understand information. “[Not recording means] trying to provide the rare opportunity for us as policymakers to talk to each other and to stakeholders so that we are better-informed about what we are thinking and questions we have to ask without the glare of the lights and cameras.”

“If we televise them, they’re no longer roundtables,” she said April 9.

But in a policy order to be heard Monday at the council’s regular meeting, councillor Minka vanBeuzekom asks for a one-time suspension of the no-cameras rule, noting that many working citizens wouldn’t be able to attend a 9:30 a.m. Friday meeting – even for a topic that drew two hours’ worth of public comment at a March 7 committee meeting, the third on the issue.

Councillor Minka vanBeuzekom is asking to let a roundtable be televised. A previous request failed.

The same argument failed last spring when vanBeuzekom wanted a suspension of the rules for a 4 p.m. weekday meeting. Councillor Craig Kelley supported vanBeuzekom’s suspension idea, while six councillors voted in opposition. Ken Reeves left that nearly year-ago meeting before the vote came up, but he’d already spoken against televising roundtables, seemingly to make a larger point about whether the council was going to follow all its rules or just some of them.

On March 7, though, during the four-hour meeting’s debate over how to keep the university’s plan moving before it expires next month, Reeves apparently felt the lesson was over.

“Typically the roundtable is not televised. It could be if we wanted it to be,” Reeves said.

The councillors on hand struggled with how to handle their need for information and the public’s right to comment. With the March 11 council meeting canceled so officials could attend an out-of-state conference, March 25 canceled for the Passover holiday and April 15 for Patriots Day – and with the university’s zoning petition expiring the next week – they worried they wouldn’t have time to absorb all the plan’s details. Maher said it was the onrushing expiration that convinced him the petition needed to be referred to the full committee that night “without a recommendation … just a procedural vote.”

“It does not mean that it will or will not be voted, but it’s possible it will be voted,” Maher said.

The council did something then unusual enough to be the basis for a headline in the Cambridge Chronicle: It voted 5-3 to move “MIT proposal forward before hearing public input.”

Kelley, Denise Simmons and vanBeuzekom voted against. Leland Cheung, Mayor Henrietta Davis, Maher, Reeves and Timothy Toomey voted in favor. Decker was traveling and couldn’t be at the meeting.

The vote was taken before public comment because Davis said she had to leave soon.

Cheung voted in favor despite having said just a moment earlier, “Usually we vote these things at the end of a meeting, after the public has commented. So I’m a little concerned about doing that. To put it politely.”

“Not looking to offend”

Voting before hearing from the public was ostensibly okay because sending the petition to the full council was only procedural, but discussion of the move sent councillors in some peculiar directions rhetorically.

“We’re not looking to offend, as though we don’t want to hear from the public,” Maher said, before suggesting a way councillors could talk without hearing from the public further – namely declaring the March 7 merely recessed at the end of the night, rather than ended. The next time the councillors met, he wouldn’t start the meeting, he explained, but would declare the recess over. And that would mean public comment had taken place during a first part of the same meeting that just happened to take place some weeks earlier.

Reeves, meanwhile, suggested the council have “a new kind of meeting,” a working study session facilitated by experts. “We could use a session that doesn’t have public comment. Then we could just stay as long as we could and talk ourselves silly about it, but at least be on the same page about what we’re trying to impact.” Otherwise, he said, “there’s just too much information that arrives the night you discuss it. So it’s not possible to give it an intelligent discussion, which was exactly the case at the last [meeting].”

Simmons supported the idea, saying “It’s very hard to get the information on that evening, hear a presentation, digest it, ask cogent questions, hear public comment and then try to render an opinion” and proposing there be “open shirt” meetings – meaning a less formal format that wouldn’t demand metaphorical buttoned collars, suits and ties.

Cheung – again speaking before his pre-public-comment vote to move the matter onward – suggested, “If we’re going to have meetings where we’re not asking for public comment, we should have another meeting maybe just for public comment.”