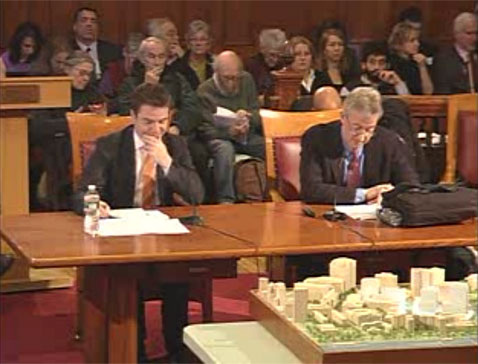 Massachusetts Institute of Technology development executives Israel Ruiz and Steve Marsh talk though a plan for Kendall Square on Thursday.

Claiming they had to act because a Massachusetts Institute of Technology plan to remake 26 acres in Kendall Square would expire in late April, a five-councillor majority voted Thursday to send a zoning petition to the full City Council from its Ordinance Committee, although the committee would keep discussing the plan.

Councillor David Maher, who leads the committee, said he would announce the next informational meeting on or by Monday, as well as organize one-on-one sessions for councillors to be run through the plan and visit the site. The Thursday meeting lasted a little over four hours, with the last half being mainly public comment.

There was enthusiasm for the plan, including from business owners who wanted to move into the square but found literally no space they could move into.

But many residents urged the city not to rush approval of the plan, since although the current filing of the plan expires April 23 according to the Planning Board and April 24 according to the council, a potentially important faculty study has a July deadline. They also made their own significant proposals to city officials:

Gary Dmytryk, president of the newly revived Association of Cambridge Neighborhoods, suggesting that the square be closed to cars, with traffic diverted at Ames Street, creating a pedestrian plaza with more room for stores, restaurants and programming. “Put a real square in Kendall Square,” Dmytryk said. “This could be the last, best chance to do something really big and really great there.” He also proposed giving the school “maximum flexibility” to build soaring towers of housing for students and staff – and create built-in markets for lower-cost retail that would serve the square’s neighbors as well as higher-income tech workers.

Fred Salvucci, a senior lecturer at the institute and former state secretary of transportation, cited a study by the president of the its Graduate Student Council, Brian Spatocco, showing a need for 5,000 units of housing for graduate students and others in the MIT community. He told councillors they needed to demand that the school build those 5,000 units either on campus or nearby, which would take its students out of the Cambridge housing market and stop pushing up prices for everyone.

“That won’t solve the whole housing crisis, but those 5,000 units for graduate students competing for Cambridge housing now being used by MIT will make a much larger contribution to solving the affordable housing problem than 13 percent of a modest number of housing units. That’s just tokenism. It’s not going to deal with the problem,” Salvucci told city councillors at a meeting of the council’s Ordinance Committee.

Residents were not the only people proposing changes. The Planning Board decided unanimously on Tuesday to recommend the plan to the council, and the recommendation seen Thursday included a five-page summation and 20 pages of revised petition, including 14 changes.

“It’s very hard to get the information on that evening, hear a presentation, digest it, ask cogent questions, hear public comment and then try to render an opinion,” councillor Denise Simmons said.

There were actually two presentations Thursday, including an impromptu talk by Charles Sullivan, executive director of the Cambridge Historical Commission, on the three structures in Kendall that might deserve preserving as an “ensemble” to contrast with more modern structures around them: the MIT Press, Rebecca’s Café and clock tower buildings. Because they’re under study as historic, the buildings are protected temporarily as landmarks, and the institute showed renderings Thursday of how Kendall Square might look with and without the Press Building still standing. But Sullivan said the commission wanted to hold back on a judgment, stay flexible and see how those plans developed.

Sullivan showed examples of how historic buildings could be added to “without destroying the character and significance of the building.”

“We feel that our most effective and constructive strategy is to continue to take part in the design decisions that are being made in Kendall Square … That is the opposite of the approach we might have taken a year ago of coming straight to you to say, ‘Lock these buildings up now,’ and the focus might have been on these buildings and not on the greater Kendall Square,” Sullivan said, explaining that the commission wanted to “protect the buildings if we can, but protect them in a ways that are flexible and respect the changing needs of their owners and the public.”

The square’s success as an innovation center is raising real estate costs and making it harder to start small businesses there or to grow them into medium-sized businesses, and the institute’s willingness to set aside “innovation space” could help. Plans are to use half of the 49,000 square feet for resources such as conference rooms shared by the businesses within, which would have short-term (and probably month-to-month) leases of suites averaging less than 200 square feet. No single business would be allowed to rent more than 2,000 square feet.

Councillor Leland Cheung pushed for the institute to double the amount of innovation space, to 10 percent of new commercial square footage, but Marsh pushed back by saying there were other ways the institute could support entrepreneurship in Kendall Square. “We’re open to any suggestions and ideas. We just frankly didn’t want to have the irony of stifling innovation by codifying it in the zoning,” Marsh said.

“I understand you don’t want to be overly prescriptive because you don’t know where it’s moving,” Cheung said, “but what I do know is that right now it’s moving to Boston because we don’t have enough innovation space. I don’t think 10 percent from 5 percent risks us stifling innovation.”

Residents and officials had plenty of ideas and comments that could keep the plan evolving, including a a suggestion by East Cambridge resident Mark Jaquith to allow soaring heights south of Main Street so long as buildings heights are restricted by Broad Canal; and a proposal at the committee’s previous meeting by School Committee member Fred Fantini to make the institute promise to accept more worthy Cambridge Rindge & Latin School graduates as underclassmen each year.

Residents also warned that the current proposal’s timetable carried dangers, especially with resident Julian Cassa noting “there has been no dialogue whatsoever” between the institute and the neighboring areas already affected by student competition for housing.

“The council should let the petition expire and then address the housing issue properly,” said Lee Farris, of the Area IV neighborhood. “The council’s leverage is completely gone if the petition is already approved.”

“That’s the number we’re looking for”

The idea of getting the institute to build at least 5,000 units of graduate student housing was popular. North Cambridge’s Charles Teague even said he was able to quote Patrick Barrett, whose support of larger-scale development in Central Square clashes with his own, in saying, “The economics of building family housing is daunting. It’s much cheaper/feasible to build smaller units with the idea that you’ll draw out students/retiree/young professionals from existing family housing stock. The best/most affordable family housing in Cambridge is what already exists.”

“Thousands,” Teague said, referring to how many units of housing could be built. “That’s the number we’re looking for.”

Adding thousands of units of student housing would also ease transportation problems, because students would be on campus, Teague said.

“The pressure in Area IV has been incredible,” said Nancy Ryan, of that neighborhood and the Cambridge Residents Alliance. “Fifty or 60 affordable units is nice, but doesn’t really make a dent in the problem if you’ve got 3,000 or so graduate students who aren’t housed on the campus. And  if they’re given housing subsidies by the university, it just means rents can keep going up in Area IV.”

The vote to refer the institute’s petition to the full council to keep it moving before the April expiration date was 5-3, with Simmons, Craig Kelley and Minka vanBeuzekom voting against. Marjorie Decker was traveling and couldn’t be at the meeting.

“I hope you are going to find enough time to really explore these issues and come up with some answers before you decide to support this petition,” Ryan told the councillors, who had dwindled to four – Maher, Cheung, Simmons and vanBeuzekom – after the vote. “And maybe it should expire and these questions get answered a little more thoroughly. It’s a lot to digest.”