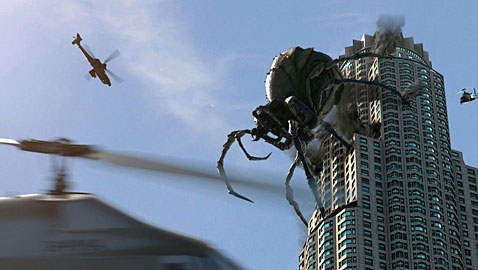 The Boston Underground Film Festival has been around in its 15 years, moving from South Boston to Jamaica Plain and Allston, and to Somerville in 2005. Now it seems pretty firmly settled in Cambridge at Harvard Square, with showings at The Brattle Theatre and parties at Oberon and Noir.

As film fans will see when it starts Wednesday, though, it never got less committed to the creative and sometimes downright weird.

“BUFF is a celebration of the bizarre and insane. BUFF is uncompromising, unflinching film and video,” organizers say. “BUFF is hazardous to your health.”

The five-day festival launches at 7:30 p.m. Wednesday at the Brattle with “I Declare War,” a look at how adolescents conduct war – capture-the-flag, in this case – that festival director of programming Nicole McControversy says reveals “the raw, emotional gravity of everything at that transitional age.” The “uncategorizable” film, directed by  Jason Lapeyre and Robert Wilson, is “done responsibly, with … a perfect blend of sincerity, sly humor and charm.”

Then things get a little out there, with the 2003 film “The Manson Family” by Jim VanBebber, who took 15 years to make what festival artistic director Kevin Monahan calls “perhaps the most objective depiction of how the flower-power mentality of the late 1960s was corrupted for a brainwashed group of followers desperate for a new messiah … ‘The Manson Family’ may be hard to watch at times, but it demands to be seen.”

And so it goes with another 21 showings, all adding shorts and videos to the mix. (“Dear Moon,” the 10-minute film by Walter Sickert of Walter Sickert and the Army of Broken Toys, runs Thursday, as does “Controlled by Rhythm,” Mike Pecci portrait of local drummer TJ Horn; the video for “Monster S-I-Z-E Monsters” by Darling Pet Munkee, directed by band leader and budding horrormeister Michael J. Epstein, is part of the Thursday “Where the Music’s At” video retrospective at 5:15 p.m.)

There are so many standouts nothing seems to stand out, but organizers McControversy, Monahan and McKay chose to cap the festival with “Big Ass Spider!” Director Mike Mendez delivers exactly what’s promised by the title – a giant, rampaging spider resulting from a military experiment gone wrong. The film, with Greg Grunberg (of “Heroes”) and Clare Kramer (Glory from “Buffy the Vampire Slayer”), is “akin to the suspenseful fun of ‘Tremors’ with the wit and charm of ‘Ghostbusters,’” McControversy says. (If you’re looking for cheese, try “Samurai Cop,” a 1989 flick with buddy cops and boobs and, well, a samurai cop. Banned in Germany.)

As to the parties: The 10 p.m. opening night party is at Oberon, with music by Young London and Bearstronaut and burlesque by Mary Widow, Dinah Deville and Sindy Katriotic; Karaoke Bacchanalia comes at 10 p.m. Saturday at Noir; and the festival ends with the 10 p.m. Sunday closing night awards at Noir, with the take-home prizes for the mantle being the festival’s distinctive Bacchus, a demonic pink-clad bunny with red eyes and a bad attitude.

The Independent Film Festival of Boston, with the help of Cantabrigian Casey Affleck, comes to Somerville and other cities April 24-30.