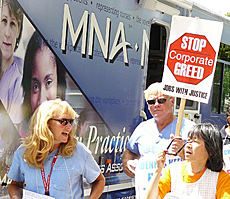 The Massachusetts Nurses Association will fight a move by Cambridge Health Alliance wants to cut mental health services for children and teens, a representative said. The union picketed the hospital in 2010. (Photo: MNA)

The three-hospital system, which includes the former Cambridge City Hospital, applied to the state Wednesday to eliminate 11 beds of a total of 27 for children and adolescents and stop serving children younger than 8. A new unit of 16 beds would combine treatment for children and teens from the ages of 8 to 18, ending separate units for children from 3 to 12 and older patients from 12 to 19.  Both units are at Cambridge Hospital.

In 2009-10 the alliance cut 35 hospital beds for adult mental health patients and 26 beds for drug and alcohol addiction treatment as part of a broad reorganization intended to reduce losses.

The most recent proposal drew fire from union nurses, who said the cuts will hurt children at a time when there is a “critical shortage” of hospital beds for mentally ill people of all ages. “We are appalled by this decision, and what it will mean for the children in our region who need the services these units provide,” Betty Kaloustian, head of the CHA bargaining unit for the Massachusetts Nurses Association, said in a written statement. The union pledged to fight the move.

The Department of Public Health is expected to hold public hearings on the proposal, The Boston Globe reported. Under state law, health care institutions must get state approval to eliminate or reduce “essential services.”

In the fiscal year that ended last summer, 380 patients used the child unit, including 74 under the age of 8, Cecere said. They stayed an average 8.5 days; an average 69 percent of beds in the unit were occupied.

The adolescent unit served 485 patients, who stayed an average eight days, Cecere said. An average 77 percent of beds were occupied.

Regardless of average occupancy, children and teens in crisis may wait hours and even days in hospital emergency rooms because there is no appropriate bed available.