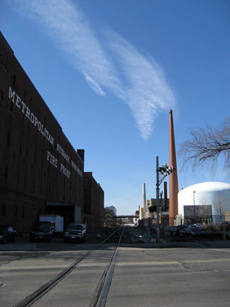 The plan to take millions of gallons of ethanol through Cambridge, Somerville and other cities by train is getting a hearing Tuesday hosted by Cambridge’s legislative delegation, which is united in opposition to the plan.

“Ethanol is a highly volatile substance, and this proposal presents a clear and present public safety risk for the people of Cambridge. Without concerted action, the burden of emergency preparedness will fall on Cambridge taxpayers while a Fortune 500 company pads its profits,” state Rep. Tim Toomey said.  “I hope that everyone who has an interest in the future of Cambridge will attend this meeting.”

The forum is scheduled for 6 p.m. Tuesday at the King Open School, 850 Cambridge St. Representatives from the state Department of Transportation will present the findings of their ethanol safety study, followed by dialogue between the public and elected officials.

The department has called ethanol “the most hazardous substance being transported by rail in the United States.”

Sometimes referred to as grain alcohol, ethanol is a volatile, flammable liquid used as a gasoline additive, Toomey noted in a recent essay opposing the plan. It is made mainly in the Midwest and shipped by rail. At the moment, ethanol bound for a facility belonging to Global Partners, a Waltham company, is first taken by rail to the Port of Providence, then shipped by barge to Revere. Construction has been proposed at the federal level for the Revere facility that would allow Global to transport ethanol via local rail – the Fitchburg Line, Lowell Line and Grand Junction Railroad.

The plan may affect traffic, since there will be 60-car trains coming through densely populated cities twice a week, and significant safety concerns. Traditional firefighting methods don’t work against ethanol – only expensive, toxic, alcohol-resistant foam is effective, and Cambridge and other cities aren’t equipped properly, according to the study.

“The plan to bring ethanol via train through Cambridge raises serious public safety concerns and potential negative environmental impacts,” said state Sen. Sal DiDomenico. “Ethanol is a highly flammable liquid, and this project will greatly increase the risk of spills, releases and fires along the route in which the 1.8-million-gallon ethanol-carrying train would pass.”

The rest of the delegation – state Sens. Sen. Patricia Jehlen and Anthony Petruccelli and state Reps. Marjorie Decker and David Rogers – urged residents to attend the meeting as well, each citing its dangers and downsides.

“Shipping ethanol through Cambridge will create an unacceptable transfer of risk from a private company to the general public. I am concerned about both the potential for a catastrophe and the ongoing financial cost to the city,” Rogers said.