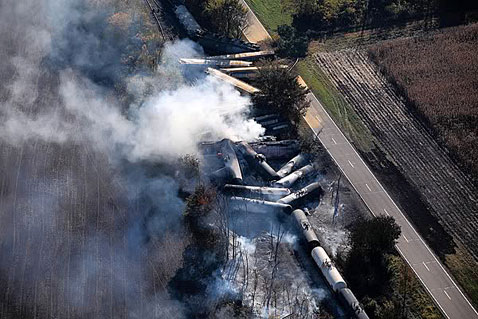 A 2011 ethanol train derailment forced the evacuation of the 787 residents of Tiskilwa, Ill. (Photo: foilhat)

One of the core principles of sound public infrastructure is the equal sharing of risks and rewards. When trains run on time and traffic flows smoothly, we all benefit. When potholes need to be filled or subway cars need to be repaired, we share in the costs because we know the rewards outweigh the costs. Sometimes a plan comes along that creates risks that far outweigh any potential public reward. And then there is the rare proposal that promises enormous shared risks but no public benefits.  One such proposal is a plan by a Fortune 500 company, Global Partners, to use commuter rail tracks in Somerville and Cambridge for the delivery of highly flammable ethanol to a facility in Revere.

Ethanol, sometimes referred to as grain alcohol, is a volatile, flammable liquid that is commonly blended into gasoline.  It is produced mainly in the Midwest and shipped by rail to other parts of the country. At the moment, ethanol bound for the Global Partners facility is first taken by rail to the Port of Providence, then shipped by barge to Revere. Construction has been proposed at the Revere facility that would allow Global to transport ethanol via local rail – the Fitchburg Line, Lowell Line and Grand Junction Railroad.

What makes rail shipments potentially dangerous is the vast amount of ethanol that they carry – nearly 2 million gallons per train, multiple times per week – and the population density of the Cambridge and Somerville neighborhoods that the ethanol would be taken through. In 2011, an ethanol train derailed and caught fire in Tiskilwa, Ill., necessitating the evacuation of the entire town – 787 people. A Massachusetts Department of Transportation safety study has determined that nearly 100,000 people in Cambridge and Somerville live within areas put at risk by these trains. In the case of an ethanol accident, safe evacuation would be incredibly difficult, if not impossible.

The dangers of transporting ethanol aren’t the only thing that makes this proposal so galling.

Despite the tremendous risk these ethanol trains would pose to our neighborhoods, there is no higher purpose or common good that would be served. Just one corporation – a Fortune 500 company with annual profits exceeding $300 million – stands to benefit from a proposal that is fundamentally unsafe and irresponsible. Should this plan be carried out, it will be the responsibility of municipal fire departments to be prepared for the worst. In the event of an ethanol fire, traditional firefighting methods are useless and only expensive, toxic, alcohol-resistant foam will be effective in fighting the fire. The safety study carried out by the Department of Transportation showed that our communities are not adequately prepared to fight a catastrophic fire resulting from an accident involving one of these trains, which means significant public investment would be required to mitigate the danger – all for the bottom line of one company.

Unfortunately, this proposal may be difficult (but not impossible) to stop. The U.S. Constitution grants the federal government power to regulate interstate commerce, and as such, Massachusetts has relatively little jurisdiction over Global’s plan. If our community is to stop this dangerous proposal, we will need those in Washington to join with the broad coalition of state and local elected officials and community activists that has organized around the common goal of protecting our property, our families and the public good. If we speak with one voice once again, we can be just as effective in this fight as we have been many times before.

Tim Toomey is a city councillor and a state representative for the Massachusetts 26th Middlesex District. He represents eastern portions of Cambridge and Somerville.