East Cambridge sees vision for loathed courthouse: Just as tall, not as bad 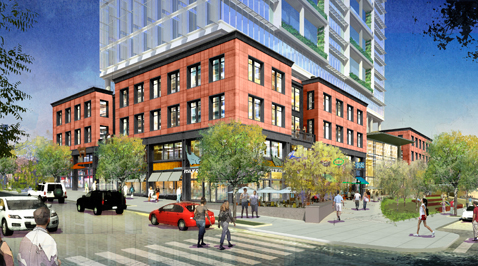 East Cambridge sees vision for loathed courthouse: Just as tall, not as bad

East Cambridge hates that tower – but feels a bit better in general about plans for the former Edward J. Sullivan Courthouse.

Plans unveiled Wednesday for the loathed, 40-year-old building towering over East Cambridge includes at least 24 units of housing, 120 parking spaces and significant efforts toward environmental sustainability, which went some distance toward easing tensions with members of the East Cambridge Planning Team at a Wednesday meeting.

It was the first full presentation of a vision from developer Leggat McCall for the site since a 13-month developer bidding and selection process began in November 2011.

“When we entered an agreement with the state Jan. 16 we gained specific information on the site and have been able to use that to really better understand this project. We’ve spent the past few months studying different ideas,” said Robert M. Dickey, a company executive vice president. “One thing we hope to show you tonight is that we’ve really responded to concerns that have come up in previous meetings and have tried to be responsive to the neighborhood.”

The initial, $200 million-plus vision is of a glassy tower with prominent two-story “window boxes” with walls of plants and a possible photovoltaic wing at the top to provide solar power (a water capture and retention system is also planned, for a LEED Gold rating) and shear off strong wind; a five-story podium with a rooftop deck and terra cotta walls, split between ground floor retail and residential units with a separate entrance; and a landscaped plaza with outdoor dining as part of the retail.

The plaza is oriented toward the smaller, residential homes in the neighborhood, Dickey said, and a three- to four-foot mass around the block will be destroyed to being retail down to sidewalk level, making it immediately accessible to passers-by. Pedestrians coming from Lopez Street will be about to walk straight through the two-story lobby instead of having to walk around the block.

Leggat McCall is also exploring a proposal that cuts the height of the 22-story tower – as so many in the neighborhood want and said again Wednesday – by adding a building across 2nd Street. The approach would ultimately mean three buildings reaching as high as 50, 160 and 216 feet, losing 700 parking spaces from the current 1,100-car parking garage and requiring additional zoning.

“We’re getting two tall buildings instead of one,” one said.

The usual 15 percent of residential square footage would be set aside for affordable units, Dickey said.

The company recognized that the neighborhood, sensitive to parking pressures, might wind up not wanting residential units at all, he said earlier that day. The notion of renting with the understanding certain tenants wouldn’t be allowed to apply for parking permits – an idea heard most recently in the 26-acre rezoning of Kendall Square the City Council passed Monday for the Massachusetts Institute of Technology – had “enforceability issues,” he said. “Are you stripping them of their legal rights to a permit? This has been talked about for years, but I don’t know of any project that’s ever had that restriction imposed.”

The 42 units would bring the residential part of the proposal nearly to the 50 units in the proposal of HYM – the most popular of the three finalists for the job, and not coincidentally the company that would have sheared four stories off the tower. “There’s a loud call out there for ‘Why not more residential?’ But at meetings with people we hear a lot of concern about parking,” Dickey said. He called putting a grocery store in the podium is another thing people want until the parking demands, traffic and loading needs are seen.

Indeed, at the Wednesday meeting team member Fabrizio Gentili said he didn’t want residential at all, while Chris Matthews called the Leggat McCall process the last chance to get rid of the parking garage. “That garage is going to be locked in forever if the building is allowed to stay” as it is, he said. “I just see history repeating itself here. The government put up this tower with no regard to the neighborhood. And now they’ve got you locked into a process that doesn’t really allow you to choose the height of the building or any of the things we said we really wanted to see.”

“Leggat McCall got trapped between a selection process with the state and the neighborhood’s unhappiness and frustration,” resident Rhoda Fantasia said. “I think you’ve been very responsive about some of our concerns – while of course ignoring the height.” 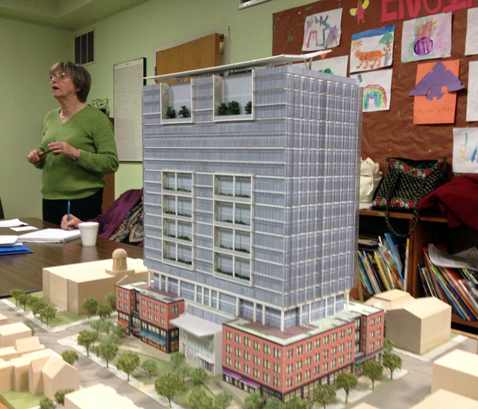 The public reaction was something of a turnaround. Right up to the morning of the meeting board members put pressure on Gov. Deval Patrick to reverse the state decision naming Leggat McCall developer.

That followed an announcement in late March by city councillor and state Rep. Marjorie Decker that she’d talked with the governor about reversing the December selection of Leggat McCall by the state Division of Capital Management Commissioner Carole Cornelison and word from Patrick that there was no going back. Residents felt their wishes hadn’t been taken into account as Cornelison gauged various factors in a selection – then seemed to look mainly at which company had the highest bid.

Leggat McCall never heard from Decker or the state about reconsideration of the bid, Dickey said. The company’s bid for the job is sealed until the end of the year. Closing is expected in January, after several hundred prisoners are taken from the top floors of the courthouse and moved to Billerica. Construction is expected to begin in the first quarter of next year and be done in the final quarter of 2015.

For most of the residents, the work paid off.

“It’s not perfect. It’s the start of a long conversation we’re all going to have for a very long time, but at this stage, I’m very impressed with what you’ve come back with,” said Joe Aiello, an executive board member for the team.