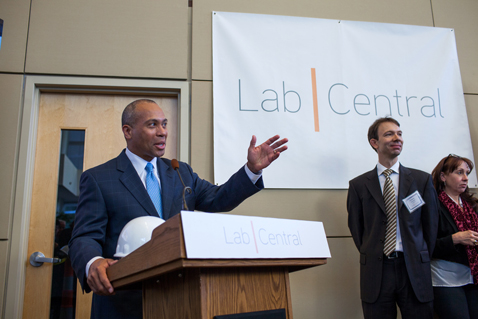 Leggat McCall intends to reveal this week its first renderings of what it expects to do with East Cambridge’s 22-story former courthouse, and the Boston Business Journal says its officials have reason to feel confident doing it: The state won’t reconsider its decision.

City councillor Marjorie Decker said last month that the state’s selection of Leggat McCall “may not be a done deal,” but the Journal’s Thomas Grillo reported Thursday that – according to Gov. Deval Patrick – there was no going back.

“The judgment is made by law on the value of the bid,” Patrick told Grillo, referring questions back to the state Division of Capital Asset Management, the agency that made the selection. It reflected language used by division Commissioner Carole Cornelison, who has said “Leggat McCall was selected as the highest bidder.”

The conversation took place Thursday at the groundbreaking ceremony for Lab Central, a biotech-capable shared-lab facility that could open as soon as November in Kendall Square and host dozens of entrepreneurs and biotech startups.

Previously officials had described the courthouse process as involving many factors in addition to a high bid, including the strength of the Leggat McCall team and the company’s financial capacity to complete the redevelopment, Cornelison said in December in making the unpopular announcement.

Decker appealed to the governor because Leggat McCall’s initial proposal included no housing, and not only did East Cambridge residents strongly favor getting housing instead of office space, but Patrick had recently announced wanting to add 10,000 multi-family housing units a year to the state.

“Weeks later, Decker said a Patrick administration official told her a purchase and sale agreement had been signed,” Grillo wrote, “and there was nothing more they could do.”

Decker’s policy order is still scheduled for a hearing Monday, asking Patrick “why his administration did not take into account the local needs and wishes of the community when awarding this bid” and suggesting housing should have been a “prerequisite for any bid placed before DCAM.” It asks also for him to provide the date of when the purchase and sale of the courthouse was signed and finalized.

Lisa Nickerson, a public relations expert with Nickerson PR who works with Leggat McCall, said last month that there may yet be housing in the building that replaces the courthouse. The expected Wednesday meeting of the East Cambridge Planning Team will feature a first look at what the company expects to do at the courthouse, she said.

“When they were designated [as developer by DCAM], it was the beginning of the process, not the end. And they’re looking forward to working with all the residents and the neighborhood and working with the East Cambridge Planning Team and coming up with something that really works for the neighborhood,” Nickerson said. “Leggat McCall didn’t say they wouldn’t do residential, they just said they would consider it. It wasn’t a part of their pitch to DCAM, but they said they would consider it.”