Returning to normal isn’t so easy 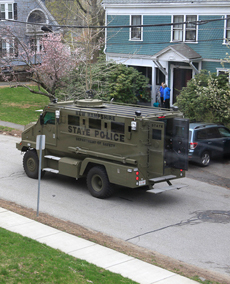 Returning to normal isn’t so easy

With the spectacular apprehension of bombing suspect No. 2 (Dzhokhar Tsarnaev) Friday evening, Boston, Cambridge, Watertown and the surrounding areas can breathe a little easier. As expected, a pall of paranoia and unease is a given, and questions linger that perhaps we won’t have the answers to for months. So in the aftermath of five days of mayhem, we try to make sense of the senseless.

At the base of it all is the why. How could someone who lived here among us, shook our hands, smiled at us, went to school with us, smoked weed with us, married us, competed alongside us, had children with us, shamelessly and maliciously and with intent kill innocent people, including an 8-year-old boy with a sweet spot for ice cream?

Shocking and unconscionable, yes, but why, after pulling such a heinous and cowardly act did the two bombing suspects hang around town? Did they assume going about their business as usual was a good cover, or was there more to come?

And what of the carjack victim, why was that person let go unharmed when a young MIT police officer was gunned down in cold blood?

Then there’s the big picture: Were these misguided youths tied to an extremist terrorism network that encouraged this, or were they pissed off that the American Dream wasn’t happening fast enough or how they wanted it to and felt disenfranchised and simply pulled a Dylan Klebold and Eric Harris?

And what of the news services who for hours reported that the two men had only been in the states for about a year, when a quick Google search would show that they were here among us for a decade? An honest mistake, but what of CNN errantly reporting that the suspects were in custody two days prematurely?

Also, did suspect No. 2 really run over suspect No. 1? If so, was it intentional or a survivalist reaction amid the chaos, and just how did Suspect 2 get away anyhow?

What started it all? Three days of nothing and then an unrelated robbery at a convenience store followed by the tragic shooting of the MIT law enforcement official – how did that manifest?

Then there’s the family; an uncle who condemns and parents who, amid overwhelming evidence, say the suspects were framed. And, in from the land of sweet irony, it’s video cameras from the same retail chain busting the mother for shoplifting and nabbing the brothers dropping their lethally laden backpacks.

And just how competent was law enforcement? The tarp-covered boat suspect No. 2 was hiding in was just marginally outside the street-by-street Watertown dragnet area, and it wasn’t until after the governor and the police lifted the no-travel/go-outside ban and practically admitted they had lost their quarry that an alert citizen gave them the lead that led to the final shootout and apprehension.

Then there are the other three people taken into custody from down near the University of Massachusetts at Dartmouth who were associates of suspect No 2. What’s their involvement, and can we really rest easy? And what did the American-born wife of suspect No. 1 know? How could he so easily have left her and a 3-year-old child behind?

It’s sad and unfortunate, but terrorism and violence happens, not just in Newtown and on 9/11, but in places around the world where bombs are a part of daily life. All we can try to do is negate the occurrence of it by being alert and vigilant without sacrificing our way of life and be ready to respond and be generous the way we were as a town and nation last Monday.

One thing that’s certain, with lightning-strike tools such as Twitter, the world can be informed of the “up to the moment breaking news” in a sliver of a second. Likewise, a transposition in or misinterpretation of 140 characters can produce a wildfire of misinformation and incite unnecessary panic.

Stories change and evolve as questions are answered. They change less over time, but their context and relevance in history is revisited and revised constantly. Nothing in the Boston bombing case should surprise us anymore. Bostonians are a resilient lot who want the truth. It won’t come easy or quick. There is a lot of good intent and vast resources being applied. It will come, and so will justice; we just need to be patient.

That’s a tall order for those who lost limbs and loved ones. Normal for them seems far and distant, relatively speaking. The answers may help them as they heal, and the rest of us can help too simply by reaching out.