Council roundtables will debrief after deaths, manhunt — and prepare next time (update) 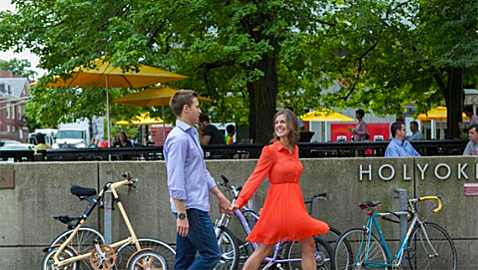 Council roundtables will debrief after deaths, manhunt — and prepare next time (update)

Newlyweds Jessica Kensky and Patrick Downes were injured in the April 15 bomb bursts at the Boston Marathon.

As Cambridge continues to collect itself after the stress of an officer’s slaying, a carjacking, hunt for bombing suspects, citywide lockdown and revelation of terrorist leanings among classmates and neighbors, there are both official commendations for how well the city and responded and plans for a next time.

Mayor Henrietta Davis proposed Monday that the City Council prepare a roundtable “to pick up all the pieces,” including a debriefing on the events of April 18-19 and a look at how best to marshall resources in a future crisis. Marjorie Decker, a councillor and state representative, said she thought it “probably has to be more than one roundtable.”

The meetings would gather leaders of the city “to do some strategic planning with a number of really great thinkers in the city about ways to quickly sketch out opportunities where a variety of people can be connected with clergy in the city, neighborhood groups, youth groups, school groups, athletic groups – there are a lot of constituencies in this community that are looking to us to find the space where they can physically connect with each other, whether it’s a hug, a hand on the back or just to be able to talk to each other as a community, beyond impromptu conversations and gatherings.”

The next council roundtable had been scheduled for 5:30 p.m. May 13 without a posted agenda. At the April 28 council meeting, that had become a “special meeting” instead, allowing it to be televised under council rules. It would include a debriefing on the events of April 18-19, Davis said. A 5 p.m. May 6 special presentation was also scheduled to thank first responders and public safety officials.

“The most trying week”

Councillors took about an hour out of their Monday meeting to talk about responses to the violence and shaken nerves of the previous week – including their own – which began with the 10:20 p.m. April 18 killing of MIT campus police officer Sean Collier, 26, apparently by two Norfolk Street residents later identified as suspects in the April 15 bombing of the Boston Marathon.

They congratulated the city’s police and fire departments for their response and thanked Cambridge Public Schools for its handling of Monday’s reopening of schools where many students, teachers and administrators had been acquainted with suspects Tamerlan Tsarnaev, 26, and his brother Dzhokhar A. Tsarnaev, 19, a popular 2011 graduate of Cambridge Rindge & Latin School. The older brother was killed; the younger was captured and hospitalized.

City Manager Robert W. Healy said it had been “the most trying week of my 39-year career,” but that the expert response by the city’s emergency personnel was no fluke.

“Ironically, just the week before we held a Cambridge Public Safety Association live shooter drill in Kendall Square. [FBI special agent] Richard DesLauriers was present, along with Boston police, the MIT police, the Harvard police and state police in an exercise of response to an active shooter in an office building setting,” Healy said. “These are the kind of trainings we do constantly. You train and train and plan and prepare. When the actual incidents are before you it’s very obvious to see the training kicks in, and it’s just so impressive to see all the investments in equipment and training were worth it.”

Those agencies were involved during the crisis late last week. DesLauriers was key in coordinating law enforcement response.

There were sure to be flaws found in the response and ways to improve a next time, Healy said, but “there should be no second-guessing. This is [going to be] an after-action debriefing.”

Councillor Minka vanBeuzekom led the councillors and Monday meeting audience in a standing ovation for the city manager and other officials for their handling of the situation.

But councillor David Maher helped remind everyone that for many people, the crisis wasn’t over. He directed people to a website hoping to raise $1 million for Jessica Kensky and Patrick Downes, young newlyweds who live in Cambridge and were caught in one of the Boston Marathon bomb bursts. Both lost the lower part of their left legs.

As of Thursday, the Give Forward fundraising site had gathered $709,126 from 12,066 donations with 115 days left to go. The Harvard Square Business Association planned a raffle at the May 5 Mayfair for the couple. Denise Jillson, executive director of the association, was soliciting donations for an auction as well.

This post was updated April 30, 2013, to add information about meetings that were announced at an April 29, 2013, council meeting.