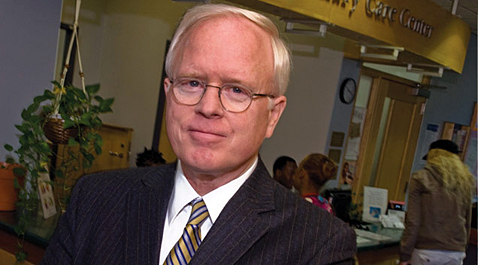 Cambridge Health Alliance goes into Wednesday’s hearing on a plan to cut mental health services for children and teens with a new batch of opponents: the City Council, which voted Monday to send a letter protesting the plan to the institutions leaders.

The strongest voice against the plan among the councillors was Marjorie Decker, who spoke in her dual role as state representative.

“We actually don’t know what’s behind this. There was no attempt, I believe, to brief the council. There was no attempt to reach not only the Cambridge legislative delegation, but a number of members from the Legislature from surrounding communities who are also affected by this,” Decker said. “The Legislature just passed a budget. Not once did I or any of my colleagues get a call saying ‘We need the Legislature to step in and invest in this or we’re going to shut the doors in Cambridge.’”

The alliance was formed in 1996 when the city helped Cambridge City Hospital acquire Somerville Hospital. Five years later the system added Whidden Memorial Hospital in Everett. The system is trying to end persistent losses. In the fiscal year that ended June 30, the system lost $28.5 million on operations.

The system applied to the state April 3 to eliminate 11 beds of a total of 27 for children and adolescents and stop serving children younger than 8. A new unit of 16 beds would combine treatment for children and teens from the ages of 8 to 18, ending separate units for children from 3 to 12 and older patients from 12 to 19.  Both units are at Cambridge Hospital.

The unit has cared for very young children with a wide variety of disorders, including severe mental illnesses, autistic spectrum disorders and mood, anxiety and bipolar disorders as well as children dealing with homicidal or suicidal thoughts, trauma and abuse. The alliance’s Child Assessment Unit was immortalized as New Hampshire writer Lisa Gardner’s model for a pediatric psychiatry unit in her 2010 novel “Live to Tell.”

At the time, David Cecere, media relations manager for the alliance, noted the unit and its leader, Kathy Regan, had “received national acclaim for establishing a standard for psychiatric inpatient care.”

In 2009-10 the alliance cut 35 hospital beds for adult mental health patients and 26 beds for drug and alcohol addiction treatment as part of a broad reorganization intended to reduce losses. Councillor Denise Simmons, who wrote the policy order the council approved Monday, noted other rollback of services as the alliance struggled, including the loss of the Oliver Farnum Senior Health Center and Riverside Health Center in 2009.

“It stuns me what has happened with CHA over the last several years,” Simmons said, noting the municipal money that has been put into the system.

On Thursday, a partnership with Beth Israel Deaconess Medical Center in Boston was announced – like the plan to cut mental health services, needing state approval to go forward. Although it wasn’t presented by alliance Chief Executive Patrick Wardell as cost-savings measure or as cause for people in Cambridge, Somerville or Everett to worry, Decker said Monday that the plan did worry her.

“The partnerships that are being created out of necessity are in Boston. That will absolutely have a devastating effect on Cambridge residents who depend on getting their health care in Cambridge,” Decker said. “If you’re not worried about being able to hop in your car and go pay $20 to go drive to Boston, not a big deal. You have the flexibility. There are a lot of families who don’t have that option.”

“What we’re seeing is an erosion of what we know as Cambridge Health Alliance. The alliance as we know it is vanishing. We are seeing it slip away from us, ” she said.

Councillor Ken Reeves and Mayor Henrietta Davis, who said they’d met recently with Wardell, took a more measured tone when talking about the cuts. Reeves expressed sympathy for a system dealing with the tightening of state and federal dollars as demand for services continues at the same pace, while Davis said she didn’t want “to assume the worst in terms of motive. I don’t like the outcome, but I don’t think the motive is one of trying to take services away from Cambridge kids, but the desire to hold the rest of the services in place so those services for older kids are available.”

Decker urged her fellow councillors to “plug in” and understand the urgency of the situation and how it will affect kids.

The hearing takes place at 2 p.m. Wednesday at Macht Auditorium at Cambridge Hospital, 1493 Cambridge St. Family members, nurses, care providers, legislators and mental health advocates from the National Alliance for the Mentally Ill and other organizations are expected to attend to speak out against the proposed closing.

“It is absolutely critical that the alliance sees the communities it is serving as partners and advocates and exhausts all their resources … not to make decisions and come back to tell us to live with the results,” Decker said. “Let us be part of the problem-solving.”