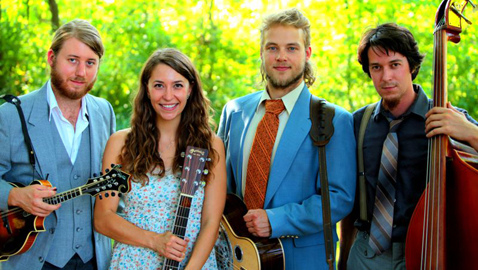 We love our roots music in Cambridge and Somerville, so we should love Lindsay Lou & the Flatbellys when they bring their unique, progressive “LouGrass” sound to Central Square on Tuesday.

The Lansing, Mich., group centers around singers and songwriters (and guitar, banjo and mandolin players) Lindsay Lou Rilko and Joshua Rilko, who stared at each other three years ago at a college open mic from opposite musical corners – her with a classical and pop background, him springing from bluegrass – but merged musical styles before marrying as well. With fellow Flatbellys Mark Lavengood on dobro, Spencer Cain on upright bass and Keith Billik on banjo and guitar, they’re also known to incorporate a bit of swing jazz, and are getting a reputation for distinct vocals, tight harmonies, instrumental expertise and creative arrangements.

The band is touring behind the album, “Release Your Shrouds,” which reviewers at Record Dept. say has songs “filled with rich characters and [touching] on universal themes such as life, love, and nature”; Popa’s Tunes called “a must-add to your music library”; and which Lonesome Highway listened to and found:

The point of the band is to push aside any such strict genre definition and just make good music – and in this they succeed … it is an honest and very enjoyable, and in places even danceable, album.