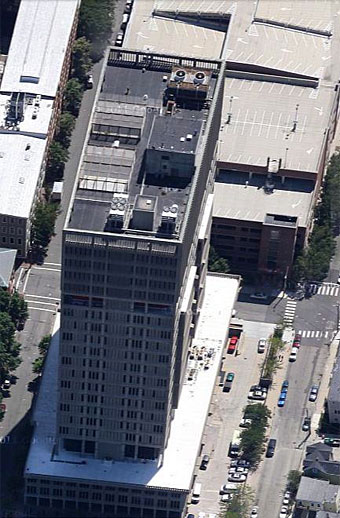 A Massachusetts judge has ordered the sheriff of Middlesex County to end unconstitutional overcrowding in the Middlesex County Jail within 30 days, ordering that no more than 230 pretrial detainees be held in a jail that in recent years has frequently housed more than 400 – the last use in a 40-story tower in East Cambridge that was once a bustling Edward J. Sullivan Courthouse.

The jail holds people who are awaiting trial and thus have not been convicted of a crime. The court order was issued in response to lawsuits filed by Prisoners’ Legal Services, the ACLU of Massachusetts and private attorneys.

After the prisoners are moved, the courthouse is to be renovated into an office tower with some residential units by Leggat McCall. The Middlesex Superior Court and Cambridge District Court, which moved out along with related government offices in 2008 and 2009 after the state decided the cost of removing asbestos from the building was too great.

The Leggat McCall deal is expected to close in January and renovation is expected to begin in the first quarter of next year, led off by extensive asbestos abatement, and be done in the final quarter of 2015 – clearing the area of prisoners that residents say often yell and call down at them.

Although a 1990 court order previously capped the number of detainees in the jail at 200, the actual number of detainees has frequently swelled to more than 400 people in a facility that was built for only 160. The resulting overcrowding forced people awaiting trial to sleep on the floor in plastic “boats” and deprived them of adequate toilet and shower facilities, according to findings issued Friday by Judge Bruce R. Henry.

“Conditions in the Cambridge jail were both inhumane and unsafe,” said Matthew R. Segal, Legal Director at the ACLU of Massachusetts. “This order will go a long way toward remedying that injustice.”

Under the order, many of the people previously held in the jail will be moved to the Billerica House of Correction, which holds pretrial detainees and inmates serving out their sentences after conviction. Specifically, Henry ordered the county to “take all available steps to house detainees or inmates at other county or state facilities or to make space available at the [Billerica House of Correction],” with the caveat that pretrial detainees may not be housed in the same cell as convicted inmates. Henry also ruled that a total of no more than 1,010 prisoners can be held at the House of Correction, though, and set specific limits on the number of prisoners in each housing unit.

“This is an important victory for everyone who cares about the Constitution and the rule of law,” said Leslie Walker, Executive Director of Prisoners’ Legal Services. “Conditions at the jail were deplorable. Judge Henry’s decision will put an end to overcrowding that failed to meet minimum standards.”

The court nominally raised the cap on the number of detainees housed at the Cambridge jail to 230 from 200, but noted that the increased cap at the jail and the House of Correction should “constitute the ceiling and not the floor on the numbers of inmates/detainees who may be housed at those facilities.” The caps may not be exceeded except temporarily in an emergency, and only with written authorization from the court.