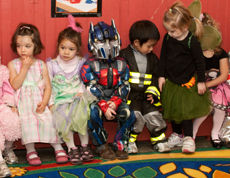 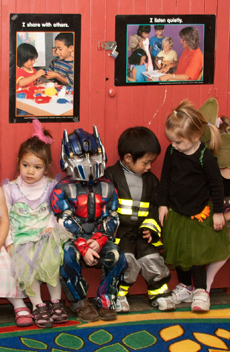 Mid-Cambridge preschoolers gather for a Halloween portrait. The School Committee hopes that by the fall of 2014, all of city 4-year-olds will be in free district programs, rather than the current two-thirds of kids. (Photo: Andrew Malone)

A bid for universal junior kindergarten in Cambridge’s public schools has led only to a realization of how little room for new kinder the district has – and a Tuesday vote by the School Committee to plead with the City Council to help alleviate the space crunch and make the plan happen.

The goal is still to get all city 4-year-olds into early education programs by September 2014, committee member Marc McGovern said. At the moment, a born-by restriction gets only about 65 percent of children into the district’s free junior kindergarten and gives their parents two bites at school placement. The remainder of city kids are let in a year later to the the district’s kindergarten, although parents can pay in the meantime for city preschool run by the Department of Human Services.

“As much as I’d like to wave a magic wand and have this happen tomorrow,” McGovern said of universal junior kindergarten, the reality of district space needs makes it impossible. “I don’t want to do it at the expense of actually costing us seats and having fewer kids get the opportunity.”

McGovern’s bid for city help, which the six-member board and Mayor Henrietta Davis voted for unanimously, replaced a policy that would created an increasingly permissive lottery to allow in 4-year-olds but, at the insistence of school principals who didn’t want newly allowed younger 4-year-olds in the same classes as older 5-year-olds, created junior-kindergarten-only classrooms and came in direct conflict with the district’s lack of space. With literally no room for separate classes, the district would actually have to accept about 40 fewer 4-year-olds than it does now.

“We’re very tight on space and seeing what might be upward curve on regular kindergarten enrollment,” said Alice Turkel, who proposed the original plan with vice chairman Fred Fantini. “I’d love to stick to my guns, but … this is really a space issue, and we can’t resolve it without city’s help.”

By adding everything from autism classrooms to science labs and splitting some schools into separate, doubled campuses for elementary and middle schoolers, the district has added some 56 classrooms in the past decade – when it consolidated to a dozen schools from 15 – while also closing schools for renovations.

There were 7,200 students in the year 2002-03 school year, committee member Patty Nolan said. The district lost 1,400 students in the four years after that year’s consolidation, but numbers have climbed back to about 6,400 – and in addition to debating early education Tuesday, the committee authorized Maloney to start looking at who’s enrolled at city charter schools to get them coming to public schools instead. That could bring even more students to a system many see as growing already.

“It’s frustrating that we in the administration can’t seem to get this across, but not a week goes by when I’m not dealing with principals’ [space needs],” Maloney said. “This summer we’re taking out locker rooms to turn into a music room. We use space in the Frisoli Youth Center and Gately Youth Center. Last week I was under pressure from the Special Ed department because it needed a new Special Start classroom … We are full. Each year it’s a struggle. There was great flexibility in this district when we had a lot of extra space, before consolidation. It’s gone.”

Look to the council

Whatever his frustrations have been, it was clear Tuesday that the committee was getting it.

“This is really a space issue, and we can’t resolve it without city’s help,” Turkel said.

“We can’t do it alone,” member Mervan Osborne said.

“It can’t just be the schools that solve this problem,” McGovern said. “This will keep us on the timetable of setting the goal for implementation in 2014 but allow us to work more collaboratively with the city, because the city’s going to have to take some ownership of this too. The schools aren’t going to be able to do it all themselves.”

It was the timetable that worried Davis. Only the night before, councillors unanimously approved  convening a roundtable with the School Committee on pre-kindergarten and early childhood education, and Davis expected it to be held in September. (The council and School Committee each have only one meeting during July and August.) McGovern’s amendment asked the district and city to lay the groundwork on finding more space so councillors and committee members could discuss a plan when they met – almost exactly a year before they hoped universal enrollment would begin.

“The idea you would say you want a universal program to begin a year from September, that’s kind of pushing it. Maybe you didn’t intend to say that,” Davis said.

“It’s a goal,” he said. “I understand these things are fluid, but I think we need a close date so we keep our feet to the fire.”

The city councillors have all spoken of support for early childhood education, McGovern said.

“I will put this pressure on the City Council. Expanding early childhood opportunities seems to be on everybody’s lips these days … I hope and am assuming that the intentions of the city councillors who have not been talking about this issue and now are are sincere. I believe that it is,” McGovern said. “We shall see. We will see when we have this roundtable if they step to the plate in the courageous way this committee was willing to step to the plate to deal with this.”

In other district news

The committee approved a plan to unify the Dr. Martin Luther King Jr. School, which only some attend for its Mandarin Chinese programs, and put the Chinese curriculum in the hands of the district rather than relying on school faculty to piece it together. The program drew complaints in testimony Tuesday that it was falling short of a 50/50 balance of English and Chinese, ignored instruction in Chinese on subjects such as science and math and was generally less than rigorous. One parent reported her son failing an admission test at a Chinese immersion school in California although in Cambridge he was seen as being proficient or above in classes.

Revisions to a controlled choice policy – meant to balance campuses demographically and improve the process for parents looking for a school for their children – were also passed after what committee members described as a decade of work and more than a dozen meetings on the most recent version of the plan. “There’s still a lot of work to be done, and it’s going to be hard to digest,” said Turkel, who has been leading the process with Fantini. “We’re sending this to the superintendent to take the policy we voted tonight and the parts of the policy still in place and make a coherent, cohesive document, and that’s going to be a very hard piece of work.”