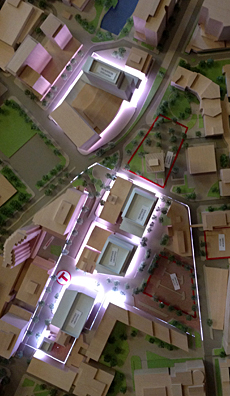 A model of Kendall Square is illuminated to show areas of construction proposed by the Massachusetts Institute of Technology. (Photo: Marc Levy)

For about 10 minutes in April, before telling the mayor she must take back her vote, the Massachusetts Institute of Technology faced having to make its 26-acre campus revamp in Kendall Square “net zero” for greenhouse gas emissions.

A citizen petition obliges the institute – along with every other example of “major new projects and substantially rehabilitated buildings” – to again face a net-zero requirement that will help in the fight against destructive global climate change.

The so-called Connolly petition was filed with the city Wednesday and appears on the agenda of the City Council on Monday. It’s the last council meeting until July 29, which is its sole full meeting scheduled for July and August, but state law puts zoning petitions submitted to the council on a 65-day schedule for a public hearing, and petition media representative Susan Ringler said the group expects the petition to be referred to the Planning Board and the council’s Ordinance Committee for public hearings this summer.

Mike Connolly, secretary of the Association of Cambridge Neighborhoods, was an informal candidate for City Council until June 14. He confirmed Saturday that helping pass the petition was one reason he dropped out of the race.

His is the first of 26 signatures on the petition, but it was initiated by the Green Cambridge nonprofit and drafted by longtime city sustainability activists John Pitkin and Quinton Zondervan – chairman of the city’s Climate Protection Action Committee – in consultation with various building design experts and community activists, Ringler said.

When it comes to large developments coming to Cambridge, the petition adds emphasis and legislative bite to an approach the city is taking with its own buildings. It’s been city policy since 2004 that all new municipal construction and major renovations follow LEED standards, with the City Hall Annex and Russell Field Fieldhouse going gold and the Main Library, West Cambridge Youth Center, War Memorial Recreational Facility, Robert W. Healy Public Safety Facility and Cambridge Rindge & Latin School designated silver.

But a project that broken ground only Monday, The Dr. Martin Luther King Jr. School being rebuilt for $84 million on Putnam Avenue and due to be done in August 2015, is net zero.

The Connolly petition doesn’t affect projects “lawfully in existence or lawfully begun, or to a building or special permit issued before the first publication of notice of the public hearing,” according to state law, but it does play a role in “a building or special permit issued after the first notice.” While MIT won its zoning, a building permit and “Large Project Review” is required from the Community Development Department or Planning Board. 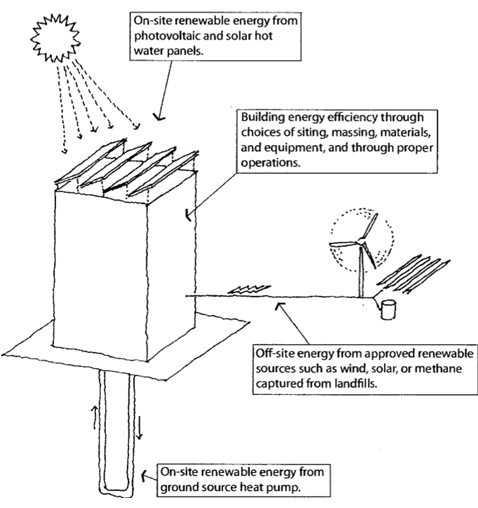 An illustration from the Connolly petition asking net-zero energy use in large developments shows four ways a project can reach that standard. Click the image to see the zoning petition.

The petition arrives at a significant time: It is on the agenda for a 5:30 p.m. Monday meeting that  comes only a half-hour after a special council presentation to celebrate the launch of the Cambridge Community Compact for a Sustainable Future, whose signers include Harvard and MIT.

Cambridge, Boston’s Back Bay neighborhood and Logan Airport have been identified as being “most at risk” from rising sea levels as a result of climate change.

“By working together – through this compact – we will greatly increase our ability to understand the true nature of the challenge. And we will improve our ability to make the progress that our shared future depends on,” MIT President L. Rafael Reif said while signing the compact in early May.

Davis, who is identified as leading the initiative, said, “Cambridge is uniquely positioned to serve as a leader in this response; we have unmatched intellectual capital and a culture of innovation and commitment to the environment. I am thrilled to partner with Harvard and MIT.”

MIT “as green as possible”

Even as the writing of the compact was under way, the council voted April 8 on the institute’s zoning in Kendall Square on a 26-acre area called PUD-5. The institute’s zoning says that “Each new building must conserve building energy and, to the extent applicable, reduce carbon/GHG emissions.”

The amendment passed with five votes, but the mayor took her vote back with the explanation that, although “it kinda breaks my heart,” she’d learned that the institute “just couldn’t support [net zero]. They don’t really understand what that means, that’s what Steve just said to me,” referring to Steve Marsh, managing director of real estate with the MIT Investment Management Co.

We are committed to being as green as possible within the framework of a viable plan. We set LEED gold as our minimum standard of sustainability for the district. This is the highest sustainability standard required under any zoning district in the city. As you know, there are very few net-zero buildings in existence in the U.S.. Most are residences on the order of a few thousand square feet, and they generate their energy through solar panels. Zero-energy is an excellent goal, but it isn’t viable today for our project in Kendall Square.

A building can get to net zero by being energy efficient, generating renewable energy onsite, by using energy supply from renewable sources elsewhere or buying renewable energy credits. The Putnam Avenue school, for instance, is being built with geothermal wells and solar panels, as well as a design that maximizes energy efficiency – grouping faculty lounge and workspace, using sunlight and shutting off energy to parts of the school that aren’t in use.

Supporters of the petition are in the process of forming a committee to facilitate further discussion and outreach in the coming weeks, Ringler said.