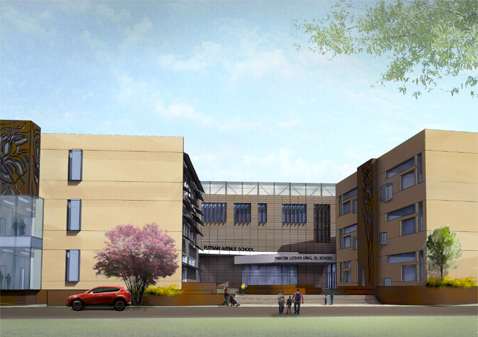 The Martin Luther King Jr. School at 100 Putnam Ave. is due to be finished in August 2015. (Image: Perkins Eastman)

The future Martin Luther King Jr. School will be one giant, 169,000-square-foot science class, with students and teachers part of keeping energy use at net zero via constant access to data on the Internet showing what and how they and their building are doing.

The 100 Putnam Ave. school is due to be finished in August 2015 and occupied the next month, costing the city about $84 million.

Originally intended to have 100 geothermal wells to regulate heat in the building, the structure will now have 65 dug starting in October, as well as photovoltaic cells converting the sun’s rays into energy and architecture that takes advantage of natural light, the School Committee learned at a Tuesday presentation by architect firm Perkins Eastman, city construction projection manager Michael J. Black and Deputy City Manager Richard C. Rossi.

“The whole school community – those who work in the building, as well as the students and the parents – will get a real education about what net zero really means and how we can affect these energy savings,” Rossi said. “This really bodes well for the future as we move along with rebuilding schools in the city. This will be more and more of an important part of that agenda, and good too for the young kids in the school. They’re going to really learn things because they’re going to be part of it. They’re going to see energy savings in how they conduct their daily lives.”

But achieving net zero energy use won’t be easy.

Getting to net zero

The smaller number of geothermal wells means the school can’t rely year-round on heat from the earth; the architects switched to a hybrid system that means boilers will turn on 21 peak-temperature days per year. The building’s lot is only 153,736 square feet, so fitting 144 staff and 660 students in two schools (plus a preschool) as well as outside play areas, public amenities and parking means building four stories tall, making for a dense structure with a proportionately small roof. To hit the energy target of 30 kBtu per square foot per year, which is about half the energy use of the current building, solar panels would have to cover an impossible 240 percent of the roof.

“We knew we weren’t going to make it,” said Jana Silsby, associate principal at Perkins Eastman. “We’re looking at other ways we can make up that difference. But the most important thing about the net zero energy process is to live within your energy budget.”

Design of the building can get the building about 60 percent of the way to net zero, Silsby said, but the people in the school will have to do the rest.

“It’s the users. The users have to be onboard with using as little energy as possible,” she said. “If we can still hit that 30 kBtu per square foot per year, we will have done something totally remarkable.”

To help, the school community will have access to building energy and water use data tailored by classroom and kind of user, from kindergarten student and upper school student to teacher and parents, and ways of working with the information are to be worked into the curriculum.

Faculty and administrators in the building are already contributing to savings by embracing the model of shared faculty space. The net zero concept will collapse if each teacher opts to bring in their own classroom coffee pot, Silsby said, but so far they are enthusiastic about the concept of central faculty work rooms with kitchen, computer and office supplies, everything from refrigerators to scanners and fax machines.

By breaking up the structure of the building, with parallel JK-5 and upper schools surrounding a “learning commons” and joining public areas, entire sections that aren’t being used can be shut off from those that are and powered down, the architects said. The preschool, which operates year-round, has access to the main building but its own entrance, making it easy for power use to be kept on there and cut everywhere else.

The building also lends itself to being broken up by color and seasonal theme, which can be especially helpful to younger kids trying to find their way around – to the Tulip Room, for instance, or to the Butterfly Room – and the existing building’s art has also been considered. Architects were to meet Wednesday with artist David Fichter to figure out the best placement for the “Further the Dream” mural made for the school’s namesake, Dr. Martin Luther King Jr., and a Vusumuzi Maduna sculpture already has a home: along the school’s central “King Street,” the multistory passageway between such areas as the auditorium, performing arts areas, dining hall and learning commons.

Rossi – who himself got credit for being “the best project manager in the country” from committee member Richard Harding – applauded the work of Perkins Eastman, for whom this is a first Cambridge project, and suggested committee members would be just as pleased by the contractors: F.L. Caulfield & Sons of Quincy, who recently worked on the Ironwood Pharmaceuticals offices at 301 Binney St., and W.T. Rich of Newton, which did “flawless jobs” building the War Memorial Recreation Center and Frisoli Youth Center and just finished the 5 Western Ave. building soon to be known as the Alice K. Wolf Center.

“I was someone who thought it would have been better from a cost and other perspectives to save the existing school, but this is a phenomenal building,” committee member Patty Nolan said. “I know my kids, who suffered through some that [existing] building, are going to be very jealous. I think kids throughout Cambridge are going to be jealous.”

There is a noon June 17 groundbreaking ceremony scheduled at the rear of the school.