Connolly opts out of race for City Council

Connolly opts out of race for City Council 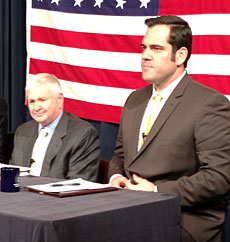 Tim Toomey, the Democratic state representative for the 26th Middlesex District, and independent challenger Micheal “No Money” Connolly at a 2012 debate in Somerville. (Photo: Marc Levy)

Michael “No Money” Connolly has decided not to run for City Council in November.

The candidate, who made a strong run for Tim Toomey’s 26th Middlesex District seat last year, opted out of a campaign Friday in a blog post, saying “in looking at the very large field of likely contenders, I think it’s clear that voters will have no shortage of promising choices on Nov. 5.”

“I know many of the candidates on a personal level, and frankly, I feel like this year’s race will be remarkably competitive,” Connolly said, “and good for the city.”

He expanded on his thinking in an e-mail:

I find myself wanting to be more deliberate about my future plans. I still feel as passionate as ever about the causes that we have worked on, and I plan to be no less involved in neighborhood affairs, but in the long run I think I can be most effective if I allow myself more of an opportunity to strengthen my ties to the community without taking on the challenge of a big political contest.

With Republican Thomas Michael Vasconcelos running from Somerville, Connolly, 32, came from his experiences with Occupy Boston to make it a three-way race. He handled himself ably in debates with the other candidates and got plenty of high-profile support and press for his stance of accepting no donations for his campaign – he took heat for accepting in-kind donations such as the printing of signs – and wound up with 4,010 votes between the seat’s cities of Cambridge and Somerville. Toomey had nearly 11,000.

While the Cambridge vote count dragged on well past midnight, the Toomey campaign said as early as 10:20 p.m. it was confident it had the votes to win, Chris Orchard said in the Somerville Patch, and Connolly called Toomey shortly before midnight to concede.

Connolly stayed active in city politics afterward, speaking against a Massachusetts Institute of Technology plan to remake 26 acres in Kendall Square that he felt was short on grad student housing, and he expressed early interest in a council seat. Official papers to file for candidacy aren’t available until next month.

With his voter list from last year’s election, he could have had a strong start in reaching out to supporters, but he said that since his recent wedding and honeymoon he decided to end campaign plans on hold – or, at least, to put them on hold. He wrote:

For me, living in Cambridge has truly been a dream come true. As many of you know, I grew up in a housing project out in Norwood, and as a teenager my friends and I liked to sneak off on the commuter rail and make our way over here on the Red Line. Sometimes we’d get off at Central Square and walk up Mass. Ave. to Harvard Square; other times we’d check out MIT and the Charles River. We were too young (and too poor) to do much of anything, but that did not matter. Just walking around this city – with its great diversity of people and places – was always very special. It inspired me to make the most of the opportunities in my life, and and with the blessing of so many new friends, I am confident that this inspiration will continue.