Five things to do this weekend: July 6-7 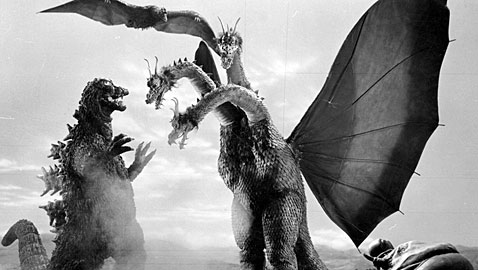 Five things to do this weekend: July 6-7

Get some free musical bliss from Les Petits Chanterus de Charlesbourg Choir. This mixed choir (in its current formation, 15 soprano, alto, tenor and bass voice performers ages 9 to 17) was founded in Quebec in 1994. This free, 80-minute lunchtime recital, sponsored by the Harvard Square Business Association, lets the group show off its repertoire of classical, gospel, folk, modern and country music at 1 p.m. Saturday on sunny Brattle Plaza, in front of Brattle Florist at 31 Brattle St.

Feel sheer terror as Mothra attacks. And Godzilla. And many others. Before Guillermo del Toro’s “Pacific Rim” arrives July 12 to pay homage to kaiju in super expensive 3-D IMAX, The Brattle Theatre has a whole day of the original stuff – Japan’s atomic fears made manifest on the big screen: “Mothra” at 1 p.m.; “Destroy All Monsters” at 3:15 p.m.; “Godzilla vs. Mechagodzilla” at 5:15 p.m.; and the 2001 reboot that added CGI to people in rubber suits, “Godzilla, Mothra, King Ghidorah: Giant Monsters All-Out Attack” at at 7:15 and 9:30 p.m. Individual tickets are $9.75 for general admission, $7.75 for shows starting before 5 p.m. and students with valid ID, $6.75 for seniors and children under 12.  These monstrous double features are $12 general admission or $10 for students, seniors or children. The Brattle Theatre is at 40 Brattle St., Harvard Square

Rock the Sixth of July with Endation, Schooltree and The Burners. If the Fourth wasn’t party enough for you, try this three-flavor variety pack of rock: At 9 p.m., The Burners uncork Gypsy Americana on acoustic guitar, mandolin and upright bass, complemented with cafe accordion, hot violin and harmonized vocals. At 10 p.m., Schooltree continues the evening with Cabaret Rock for nerds and weirdos and everyone else – music that weaves together power pop, ‘70s-era progressive rock, classical eras and theatrical storytelling. At 11 p.m., Endation caps the night with its stripped-down, raw power, heavy with bombastic rhythms, a fusion of complex and simple but also melodic, serene and emotional. The show is at Precinct, 70 Union Square, Somerville.

Get some play time in. In May, inspired by Mike Lanza’s “Playborhood: Turn Your Neighborhood Into a Place for Play,” Somerville Mayor Joseph A. Curtatone launched SomerPlay, an initiative to address any local “play deficit” and find more places for fun in the city’s dense 4.1 square miles. Check out the results with “SomerPlay: Old Time Games in the Garden” (think egg tosses, hula hoops and the like) at 5:30 p.m. Sunday at the Somerville Community Growing Center, 22 Vinal Ave., near Union Square, Somerville. (Cambridge has Sunday play too at the Sunday Parkland Games from 3:30 to 6 p.m. at 948 Memorial Drive.)

Dance, folk, dance. International Folk Dancing on summer weekends is a regular thing in Cambridge, thanks to the Massachusetts Institute of Technology’s Folk Dance Club. Arrive between 8 and 9 p.m. Sunday to learn and have some beginner spins, then stay to 11 p.m. as a mix of skill levels takes advantage of the club’s wide-ranging repertoire, includes circle and couple dances from Eastern Europe (Bulgaria, Romania, Serbia, Croatia, Greece and others) and around the world (Israel, France, Turkey, Russia, Armenia, Germany, China, Sweden, South Africa, even England and the United States). The events run through Aug. 11 on the fourth floor of the Stratton Student Center, which is at 84 Massachusetts Ave. to most people but known as Building W20 to the MIT community.