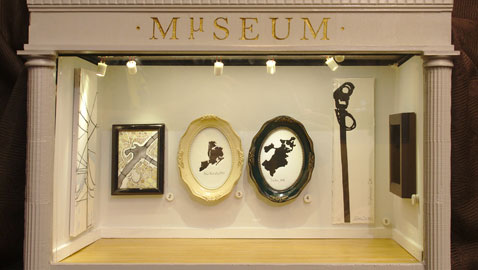 Get micro at Artbeat. The theme of this year’s Davis Square public arts and music festival, Artbeat, is “micro,” and Saturday starts with the unveiling of what might be the world’s smallest museum (a 10”x16”x8” gallery soon to be in Union Square but now at the Elm Street opening of the Davis Square T stop, complete with track lighting, wood floors and online presence) and the presence of two dancing fine-art superheroes, as well as music by the Hot Club of Somerville, El Sistema, The Sunsetters and The Grownup Noise. The full schedule is here, starting with great bands and a micro-meet Friday.

Celebrate the release of the Amethyst Arsenic summer issue. This online publisher of poetry, art and music founded in 2011 – called “one of five awesome new literary magazines” by Yahoo Voices – parties IRL at the Out of the Blue Gallery and its backyard. In addition to Amethyst Arsenic editors Jade Sylvan, Sam Cha and Samantha Milowsky, there will be poetry by Lea C. Deschenes, Alia Hamada, Krysten Hill, Sophia Holtz and Kurt Klopmeier; and and music by Anne Marie Bottcher and Marcelo Carboni, Andrew Scandal and the Lightyears, and Ruby Rose Fox. Donations of $3 to $5 will help pay for use of the gallery, at 106 Prospect St. Doors are at 6:30 p.m., with the features starting at 7 p.m.

Participate in “The Rite of Spring” (and do some “Symphonic Dances”). The award-winning Mercury Orchestra, conducted by Channing Yu, commemorates the 100th anniversary of the wild, chaotic premiere of Stravinsky’s “Rite of Spring” – with its relentless irregular driving rhythms, sharp harmonic ambiguities and magnificent power – and supplements it with Rachmaninoff’s final composition, the “Symphonic Dances,” in Harvard’s beautiful Sanders Theatre, 45 Quincy St., near Harvard Square.Tickets for the 8 p.m. concert are $25 general admission or $20 for students, Harvard ID holders and WBUR and WGBH members. Advance tickets are $20 and $15 respectively. The performance will end at approximately 9:40 pm.

Get serious about climate change with Bill McKibben and others. Environmental writer Bill McKibben (“The End of Nature,” “Oil and Honey: The Education of An Unlikely Activist” and others) is the headlining speaker at this benefit with state Sen. Will Brownsberger and veteran economic justice activist Camilo Vive. The topic: the fossil fuel resistance movement and transitioning to a green economy. Proceeds will support the legal fund of the Summer Heat action coming July 28 to try to shut down the Brayton Point Coal Plant, the largest coal-fired power plant from Massachusetts to Maine. The suggested donation is $15 dollars at the door, or whatever you can give, and at 4 p.m. there will be an “art build” to make signs, banners and puppets for the protest. The speakers begin at 7 p.m. at First Parish Cambridge Unitarian Universalist, 3 Church St., Harvard Square.

Hear the gospel of the Future Bible Heroes. This electronica project from The Magnetic Field’s Stephin Merritt and local DJ hero Chris Ewen released its first album in 11 years in June and now takes the stage to show off the new stuff, as well as to celebrate Merge Records’ gathering of its hard-to-find older material. Ewen and singer Claudia Gonson bring on Shirley Simms and Anthony Kaczynski to make everyone dance to the mordant lyrics of Merritt (sample song title: “Keep Your Children in a Coma”), who is sidelined by health issues. The famed synth band plays at 9 p.m. Sunday at The Sinclair, 52 Church St., Harvard Square. Tickets are $15 in advance or $18 at the door.