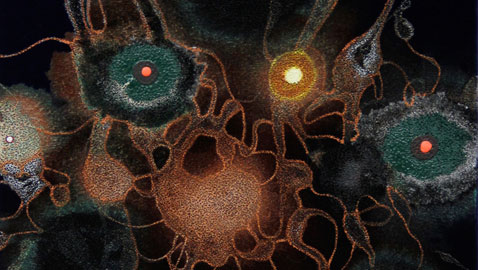 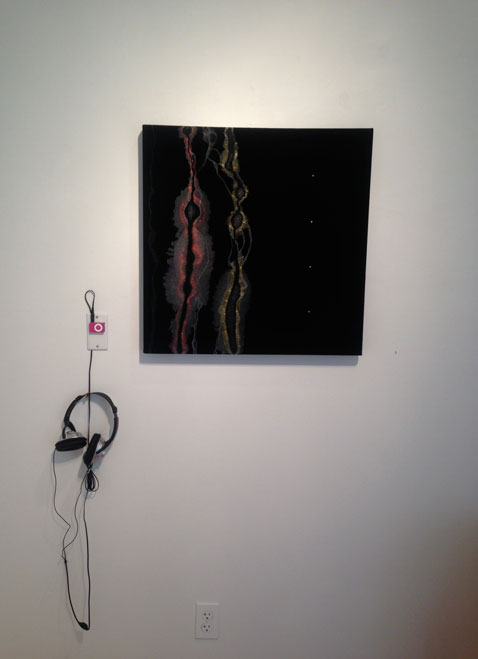 Singer Mali Sastri, curator of the themed Org shows at Oberon, jumps the river Friday for the opening of the “Ten Paintings/Ten Songs” collaboration with artist Steven Bogart.

The show matches 10 of Bogart’s paintings, all splashing biological forms across a blackness that could be microscopic or interstellar, with 10 recordings by Sastri, leader of the band Jaggery – whose art-rock repertoire has been labeled everything from “darkwave jazz” to “ethereal avant-rock,” both of which suggest where the artists’ work overlaps.

(Sastri and Bogart connected at Lexington High School, and Cantabrigians will remember him as the director demanded by fellow Lexingtonian Amanda Palmer for the American Repertory Theater’s 2010 “Cabaret” production.)

The songs and paintings began influencing each other as soon as the artists started sharing their work in the fall of 2011, Sastri said. The oil paintings and vocal- and keyboard-based music (with contributions by Jaggery players) “are an ethereal amalgamation of bioforms, biospace and expressive utterances in combination with acoustic and electronic resonance.”

The show, at Boston’s Bromfield Gallery, exhibits each painting with its own sound station where a gallery visitor can appreciate the visual and audible together.

The opening reception is 6 to 8:30 p.m. Friday (part of a SoWa First Friday) at the Bromfield Gallery, 450 Harrison Ave, Boston. As part of the reception, songs from the project will be performed live.

The exhibit runs through August 24. Gallery hours are noon to 5 p.m. Wednesday through Sunday.