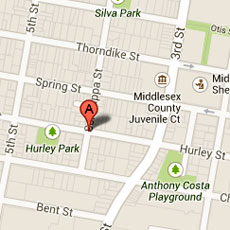 At approximately 2:30 a.m., Cambridge Police responded to a report of a stabbing on Hurley Street near Sciarappa Street in East Cambridge and arrested a young man as a suspect.

Officers arrived within a minute of the call and found a man on the sidewalk who’d been stabbed multiple times. With the help of witnesses in the residential area, police rendered first aid, then got the man taken to a nearby hospital.

The victim was treated for “serious injuries,” police said.

The victim and his attacked knew each other, witnesses said, describing arguing and yelling before the stabbing. The attacker fled, they said, but additional responding officers arrested a suspect after a foot chase: Douglas Brioso, 18, of 264 Walden St.

Brioso was arrested and charged with armed assault to murder and resisting arrest. A search of public records suggests that Brioso is a member of a storied long-time local family and Cambridge Rindge & Latin baseball player but has recently been homeless.