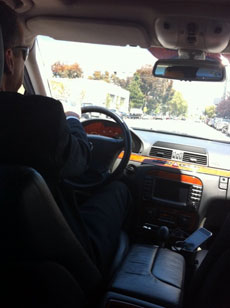 Livery drivers working with new smartphone services such as Uber are legal on city streets with the Tuesday lifting of a 13-year moratorium. (Photo: Uber)

Unlicensed livery drivers are safe to drive in Cambridge with the lifting of a moratorium on livery licenses enacted in 2000, part of an ongoing revamp of rules that follows a losing lawsuit and two summertime hearings.

After hearing public comment Tuesday, the License Commission decided to allow unlicensed drivers to pick up customers in Cambridge if they have valid livery plates, a Cambridge business certificate and proper insurance.

The moratorium was enacted to allow time for inspection and approval of all previously licensed liveries and to perform a study on the number of liveries in the city. It’s now 13 years later – and commissioners said the study never happened, but reported nearly 50 unlicensed liveries operating illegally in the city, using just a Cambridge business certificate. Other livery drivers resorted to getting licenses from neighboring cities and towns.

During public comment on the city’s outdated regulations, drivers complained about a set of rules enacted in 1998 saying for-hire livery vehicles must charge a minimum of $40 for all fares and have eight-hour notice on all reservations. The regulations were enacted long before the first iPhone or Android and the apps technology rendering the rules obsolete.

Apps such as Uber allow customers to arrange a pickup within seconds and pay for the service, all through their phone. Livery driver Yonas Halemichael said the average time between notice from Uber and customer pickup is five minutes.

“Time has moved on and we have to move on as well,” said Halemichael, who has a business certificate but is unlicensed. “We want to follow the rules but we have no option. People want it when they need it.”

The drivers at Tuesday’s meeting argue that since they can’t be hailed off the street, they are in no way a taxi service. Opponents of Uber argue that it is essentially a digital hailing service, but Cambridge and the state Division of Standards wrestled with this in Middlesex Superior Court over the summer, finding its wariness over the various smartphone-driven businesses threatening the traditional taxi model rejected by Judge Bruce Henry.

The License Commission heard nearly a dozen public speakers on the livery issue Tuesday and decided to take the matter under advisement. The commission staff will research lifting the moratorium, creating a new set of regulations to fit better with current technology and reach out to interested members of the industry for comment. A packet of material on regulation changes will be presented at 10 a.m. Dec. 5 to the commission for a decision. Until then, drivers such as Halemichael who are unlicensed but abide by all other livery regulations may operate in Cambridge unpunished.

In other commission actions:

Fatima Miller may be able to read palms, but she couldn’t read the laws of Cambridge requiring fortune tellers be licensed by the city. After she being nabbed by a resident complaint that an unlicensed fortune teller was operating at 1 Brattle St., Miller was told to go through the proper procedure to get a license, or to close. Her license won wary approval from commissioners, with the stipulation that any complaint against her business be reported to them.

The Bon Me food truck at Harvard Science Center is here to stay. The makers of Vietnamese fare were approved to serve at the 1 Oxford St. location permanently. The truck had been using a temporary license, but now can operate from 11 a.m. to 7 p.m. seven days a week.