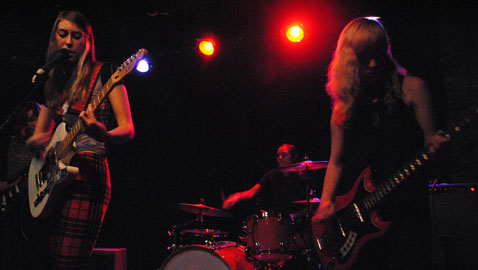 The streets of Allston sounded no different on Monday night. The Green Line trains still screamed in pain every time they came to a full stop, every 10 seconds, but Northampton punk quartet Potty Mouth brought a fresh sound to Great Scott in Allston to celebrate the release of their debut full-length album, “Hell Bent.”

“We’re excited for the album to be out,” guitarist Phoebe Harris said after the show. “We’re already writing new material. We have 12 new songs ready to go.”

The band is moving fast. If you haven’t been listening, it’s time to jump aboard. 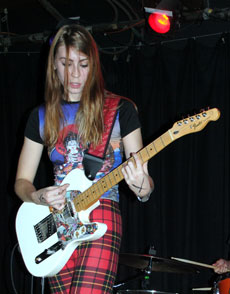 When writing about an all-female anything, it’s hard to avoid a feminist edge or break into a few lines on “girl power!” But, in Potty Mouth’s case, it isn’t at all necessary. Their talent outweighs the double standard of the music industry. Being a girl is a factor in their lyrics, but isn’t prominent enough to scare any guys in the audience from singing along.

Lead singer Abby Weems, 19 – young enough for a required pair of Xs on her hands – makes her monotone vocals exciting, matching the pop punk rhythms of Harris, drummer Victoria Mandanas and bassist Ally Einbinder. Their songs depict the confusion of being young, feeling invincible and helpless at the same time (captured brilliantly in “The Better End,” which addresses a break-up with the powerful and fun line, “Here’s the thing, I’m the best”). They’ve found their style and transcended a genre with successful songwriting.

Swaying alongside a crowd of Pabst Blue Ribbon drinkers while listening to Potty Mouth rock a small stage makes it easy to see how they connect to their fans. With leopard print and platform shoes, Potty Mouth’s style conveys the punk music they dish out. But when Weems’ long hair wasn’t hiding her face Monday you could see a smile peek through her locks; when Mandanas asked a fan to bring her a Smuttynose on draft; and when Harris stopped the show to recognize her family in the audience, you could feel their warmth and relatability permeate the audience.

“Playing in Boston is like a local show for us. We get to play with a lot of our friends and have a great time,” said Harris, originally from Portland, Maine.

Potty Mouth is young, driven and talented. Red Bull named Harris one of the top 30 guitarists under 30 this year, and they played at The New Yorker festival Sunday as part of Rookie Magazine’s Afternoon Showcase, part of the band’s tour of the East Coast to promote “Hell Bent.”

The band injects excitement into its music through jumpy rhythms and beats to counter Weems’ lack of inflection while crooning their youth-driven lyrics. “Hell Bent,” which follows their 2011 LP “Sun Damages,” is, put simply, fun to listen to, and the band is undoubtedly one to watch. Now it’s just a matter of waiting for the band to come back.