Our mayor, on the road, says we don’t know what ‘net zero’ is; we just want it

Our mayor, on the road, says we don’t know what ‘net zero’ is; we just want it

This comes up often when there’s a meeting with public comment where officials listen before voting on something (and sometimes when they, ahem, vote before listening), but it’s of particular concern now that Mayor Henrietta Davis has been quoted during a Thursday panel discussion at the second annual Net Zero Cities conference in Fort Collins, Colo. Here’s what the mayor said:

Our citizens aren’t quite sure what ‘net zero’ is, but they know they want it.

Now, there are contexts in which Davis could have said this that would make it seem less mocking and condescending. The North Colorado Business Report article quoting her is short and doesn’t provide one.

But it is, frankly, an odd thing for Davis to say just a couple of days after affirming the model for a city task force on imposing net zero emissions rules on big developers that wouldn’t exist if citizens hadn’t written a zoning petition forcing the issue.

It is an odd thing to say just a couple of days after hearing a parade of testimony from citizens that included academics, government workers and professionals, some of whom work in the fields of clean energy, others who have been working on environmental causes for years or who themselves live net zero. 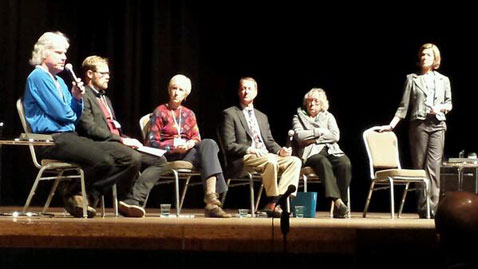 It is an odd thing to say in the home of Harvard and the Massachusetts Institute of Technology, a bastion of liberalism that recycles, composts, rides bikes or takes part in car-sharing programs and public transportation, assails the city over virtually every tree removal, puts up photovoltaic cells and sinks geothermal wells, take part in thermal imaging programs and supports specifically “green” real estate offices.

It’s simply an odd thing to say in a city of 105,162 where, according to data from the U.S. Census’ 2009-11 American Community Survey cited by our own Community Development Department, 73.3 percent of the population over 25 has either a four-year bachelor degree or a graduate degree. And 34 percent of the population (mainly under 25) is in college for either a graduate or undergraduate degree, according to the Cambridge Office of Tourism. Plenty of residents, of course, teach at Harvard, MIT and Lesley University or work in innovation and energy industries. And surely some must read – about environmental causes in general, if not among the city’s newspapers and websites about this specific proposal.

Finally, it’s an odd thing to say as an environmentalist who’s been in office for many years and would normally be taking some sort of responsibility for educating her city and leading her constituents … but is also the mayor who took back her net zero vote for MIT development and convened a panel on the topic that bizarrely ignored the principles of the zoning petition inspiring it.

Cambridge is very much the kind of city and populace a mayor would want to boast of when traveling, especially to a Net Zero Cities conference. A mayor making fun of her hometown with a glib, insulting comment would make no sense. One would think this citizenry is the reason Davis was at this conference.

Maybe the North Colorado Business Report cut off Davis’ quote? She probably said something like:

Our citizens aren’t quite sure what ‘net zero’ is, but they know they want it – because any sane, even slightly educated person who has been paying even a bit of attention over the past couple of decades and doesn’t have some sort of weird political, corporate or ideological reason for purposely sticking their head in the sand knows we’re in the midst of a climate crisis and must take action immediately, for all our sakes.

Davis is not running for reelection.