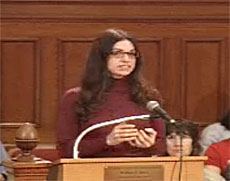 Jeanne Semivan warns city councillors Monday that Cambridge’s adoption of net zero greenhouse gas policies will be a model for other communities.

Even as the City Council accepted the city manager’s plan to implement a “net zero” task force Monday, citizen after citizen spoke to urge them to pursue its environmental goals even more aggressively.

Eighteen residents spoke during public comment, complimenting the council on coming as far as they had in backing the Connolly petition, which says developments of 25,000 square feet or more should be “net zero” on emissions of greenhouse gases through a mix of construction techniques; smart use by people inside the buildings; onsite energy generation such as by solar panels; using renewable energy over the existing grid; or, if absolutely necessary, by buying renewable energy certificates.

But they also worried that “Getting to Net Zero” task force to be led by City Manager Richard C. Rossi would be treated like past soundings of the alarm on climate change – nationally and locally – in which an emergency is declared, followed by steps that seem less than urgent.

“As I see it, the council is not fully engaged on this issue,” said John Pitkin, a longtime environmental activist in Cambridge and co-author of the Connolly petition. The issues raised in the petition “need to be on the council’s front burner, not just tonight, but month-in, month-out and for many years in the future … the council needs to be engaged.”

School Committee member Patty Nolan had similar worries. “We should learn from our own history,” Nolan said. “We know there will be pressure to say, ‘Oh, this will take time, it might take a lot longer than we think’ … We have to ensure that mindset does not prevail. It must be resisted. And it can be resisted only if folks step up and monitor progress and keep the spotlight on.”

Rossi put out a call for members of the task force Tuesday, asking for applications by Nov. 12 so he could make all appointments by the end of the year and start the group meeting at least once a month starting in December. A final set of recommendations on implementing the petition is to be filed by December 2014.

On Monday he was still considering the final structure of the group, which he said from recent experience could work without a chairman – a response to councillor Minka vanBeuzekom saying that she believed the task force’s success could be ensured by finding the right person to lead it and set the tone for its process. She got more assurance, though, in telling Rossi she wanted “to be sure this is a technical task force so we’re way beyond the ‘Why are we doing this?’ kind of a question.”

Rossi heard more stress on success from residents such as Jeanne Semivan, who believed Cambridge’s adoption of a net zero building code would have “a multiplier effect” on other communities by showing that such zoning was doable and practical. But “if this task force were to be used to adopt only a half-measure, that would reduce the ambition of other communities who would look to us as a model.”

Semivan was only one of several residents who wanted the task force to treat the Connolly petition as a starting point. George Mokray said the petition “doesn’t go far enough” in encouraging development in Cambridge to produce so much renewable energy that the excess could go out onto the grid; Ellen Mass wanted the zoning applied retroactively to large building projects in design or under construction; and Eric Grunebaum thought if done right the zoning could be applied toward such efforts as insulating every building no matter the size, rather than just be applied to larger developments.

There was another contingent of residents arguing for the practicality of the Connolly petition in the face of developer and Chamber of Commerce fears.

John Massie, who works for an energy-efficiency company in Boston, said that in the past 18 months he has seen “thousands of people [locally] jumping at the chance to make their homes more energy efficient,” including an 800 percent increase in adoption of residential solar panels this summer over the same time last year. Sue Butler testified to being an early adopter in residential conservation and renewable energy who has turned the 13,000 square feet of property she owns and rents out a half-block from City Hall into a model of net-zero photovoltaic and geothermal energy generation. She said she’s paid $200 for electricity over the past four years.

“If I can do this, you can too,” said Butler, who works part time as a nurse.

Ben Pignatelli, of the state’s Department of Energy Resources, assured the council and business community that the tax rolls in Cambridge will swell with net zero buildings, noting as an example studies showing homes heated with natural gas sell for $11 more a square foot that with traditional heating sources.

“More efficient buildings are worth more,” he said. “I say, take the builders who will build the way we want.”

Council candidate Nadeem Mazen said that speaking as a supporter of the net zero petition, there have been aspects of debate leading to this point that have left him “decidedly unpsyched” – namely that when proponents try to talk about the specifics of what’s proposed, the answers that come back have often been about completely different aspects of net zero. He asked that direct questions be answered directly to help refine the Connolly petition language into something better.

“This talk of [renewable energy certificates] and many of the other factors that would kill this initiative dead seem to be kind of a straw man argument used to shift attention away from what’s really being proposed,” Mazen said. The lopsided arguments have “made me feel like I’m on crazy pills here.”