How councillors went against the rules, and their environmental roots, for MIT 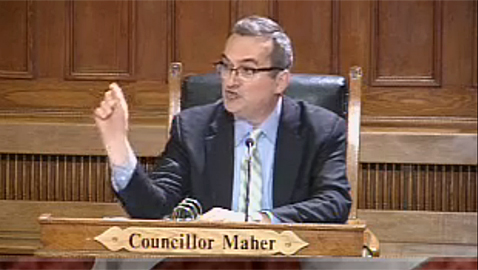 How councillors went against the rules, and their environmental roots, for MIT

Since the attorney general reprimanded our City Council for violating the open meeting law when voting in our new city manager, the return of “net zero emissions”  to the city agenda demands a forensic examination of how our council broke its own rules and likely again violated the open meeting law to grant MIT’s wish to kill the first “net zero” attempt.

Video of the council’s April 8 voting to grant MIT the right to build vastly bigger and taller on its 26 acres in Kendall Square shows what we already know: that Mayor Henrietta Davis voted for the net zero amendment and it passed; 10 minutes later, she changed her vote to defeat it. Davis then stated on camera “it has come to my attention that [net zero] may be a way to sink this entire project.” Additionally, Davis told Cambridge Day immediately afterward that MIT “just couldn’t support [net zero]. They don’t really understand what that means, that’s what Steve [Marsh, MIT’s representative] just said to me.”

Since the video shows that Davis never left the podium and there was no public discussion with MIT, how did this information get to her?

The video does show that councillor David Maher and Davis’ aide, Matt Nelson, exited to the “green room” (the council anteroom), returned and conferred with Davis multiple times. It does not show who said what to whom, but these exchanges are the likely communication path with the Massachusetts Institute of Technology.

The time for lobbying by MIT and for Maher’s running in and out and all around the council chamber was created by a long, nonsensical filibuster by councillor Ken Reeves, which ended abruptly when Maher passed him a note.

Just before a final announcement, Davis simply turned to the clerk to change her vote. Any other councillor must ask the mayor, as chairwoman of the meeting, to change their vote. Such a request would have forced a call for unanimous consent – which councillor Minka vanBeuzekom, the maker of the meeting’s net zero amendment, could have vetoed. Then a majority vote on suspension of the rules followed by a motion to reconsider would have been required. Then the entire council would be allowed to debate and discuss the reasons for Davis’ change. Instead, the public and the other councillors were deprived of the private discussions that led to Davis’ unilateral vote change. Instead, Davis used her unique position as mayor to violate the council rules she is known for vigorously enforcing.

With Reeves’ obvious filibuster, it is hard to see how this was not an intentional violation of the state’s open meeting law. Did non-council members discuss the motion privately with Maher or Nelson (or both) while the council was in session? Was the public and the rest of the council illegally deprived of their right to a full and open discussion? Davis’ admissions show that MIT was granted special access to some council members while other members and the public were shut out.

One interpretation of what happened is that Davis, knowing she would not run for re-election, used her office to break council rules, violate the open meeting law and personally pull the trigger to kill net-zero for MIT. If so, Davis broke the trust of every citizen, especially her longtime environmental supporters who know it is critical for MIT and Cambridge to lead the fight against climate change. Even worse, our council let MIT go the opposite way, substituting watered-down language and no longer requiring the previously promised and highly touted LEED Gold building standards. The revised language was never posted on the city’s Web page of all zoning amendments under consideration.

Fred Salvucci, a lecturer at MIT and former state secretary of transportation, said he was “disgusted” by MIT and Davis for their “disgraceful performance” and their “lack of commitment to principle.”

This is not the first time Davis put MIT’s real estate interests ahead of the public. In an Ordinance Committee hearing before her killing of net zero for MIT, she called for the vote to move MIT’s upzoning forward before any allowing public comment. The Cambridge Chronicle reported that the public hissed Davis.

But Maher, who made this all possible, is running for reelection. Reeves is also.

If you find the description of what the councillors did unbelievable, watch the video yourself. It’s about 12 minutes long, but annotated so you can follow the action.

Here’s the replay: MIT’s coach, Steve Marsh, sends in the play from the sidelines to his quarterback, Maher, shown on the video replay huddling with Davis, Nelson and Decker, passing notes to Reeves and Kelley, and slanting off-camera toward Cheung, Simmons and Toomey. Reeves screened the play from the public, vanBeuzekom and Kelley; then Davis walked in to score for MIT, untouched and untackled.

Many say our City Council is dysfunctional and cannot work together. This is not true. The video seems to show them working together to deliberately violate the rules. Our council is a team. Unfortunately, they are playing for MIT and not for us.