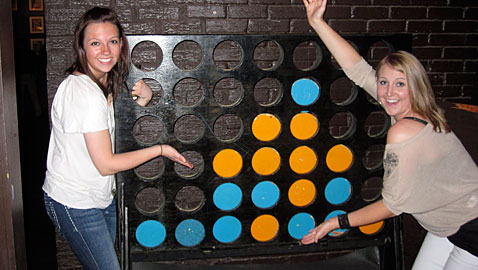 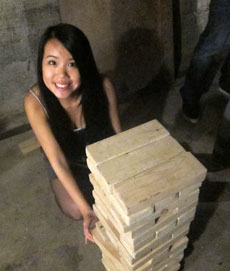 Giant Jenga is among the games coming to Moksa each Wednesday. (Photo: Rick Chung)

Starting Wednesday, Central Square’s sophisticated pan-Asian small-plates restaurant, Moksa, is getting a little less fancy in a big way – meaning a weekly Game Night with a spotlight on giant versions of party games. The games include Connect Four, Jenga and “Bear” Pong, which substitutes inflatable balls for pingpong balls and buckets for party cups. (No beer is involved unless you buy it; the night is sponsored by Sapporo Beer.)

There’s also bocce, played on a full-size indoor astroturf court, said organizers at Moksa, also the sponsor bar for the Cambridge division of Major League Bocce Boston. With bocce in Cambridge taking place in Pacific Street Park (there’s also a court on Cambridge Street in East Boston, with Atwood’s Tavern and Pug’s Bar & Grill lending equipment), this provides a local cold-weather home for the sport. Those who miss the downstairs bocce court at the long-closed Davis Square Bertucci’s could also be interested.

Participation in the games is free, with Moksa staff hoping to persuade players that they need some $1 shrimp shumai, tuna dumplings and vegetable spring rolls or $2 chicken lettuce wraps, tea-smoked pork belly steam buns and baby back ribs to keep them strong for competition.