Guerilla Toss performs tonight, and here are 10 things you might want to know 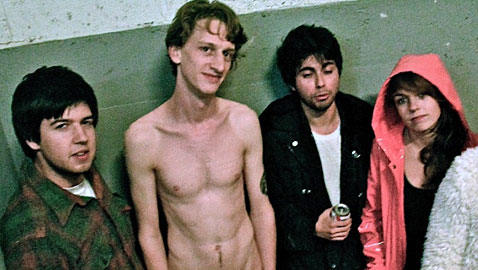 Guerilla Toss performs tonight, and here are 10 things you might want to know

The art-rock band Guerilla Toss, which was chosen as the crowning, closing band for October’s Cambridge-hosted two-day New England Underground Music Festival, is back tonight at Middlesex Lounge with Blanche Blanche Blanche and Fat Creeps, and some of you – not all of you – should go have the experience. But not before you know some things about the band:

Just because it sounds like a lot of goddamned noise doesn’t mean you shouldn’t go.

Guerilla Toss is an intensely high-energy dada band that is nearly impossible to describe (unless you’re in the “just a lot of goddamned noise” camp) without lots of slashes and hyphens. They’ve been called “oddly structured no-core/scum funk” and even their publicist likes to give fair warning in e-mail blasts, describing the band and its members thusly:

Birthed from the depths of hippy-noise-punk-dungeon-slum-basements … a self-proclaimed “blah wave” band that are serious like cocaine and silly like Ringo Starr. Kassie Carlson shrieks, rants and raves like a cat in heat; guitarist Arian Shaifee shreds like Albert Ayler shooting his first speedball after rising out of the east river as a zombie, Simon Hanes plays bass like Bill Laswell if people still cared; Ian Kovac’s synth lines are primitive, perfect, and wise; and Peter Negroponte’s mutant drum set  grooves like James Brown being rushed to the hospital on an ayahuasca overdose.

Simon Hanes, comparing the local experimental scene to his previous home in California, complimented it and made us love him in an interview during the NEUMF. “There was a very strong divide,” Hanes said of California. “Here in Boston, its seems like everybody just like, regardless of what your music is like or what you’re trying to do – whether it’s some high art thing or some low art fuck-off bullshit thing – everybody still treats each other as equals and goes to see each other’s shows and are supportive. It’s more supportive and less divided.” Sweet.

The nudity is most often Hanes. If you want to see Hanes’ junk, you probably will. Hell, the official band photo features Hanes’ slightly blurred schlong in it, because he’s pulled down his pants and boxers for it.

Blanche Blanche Blanche is the Vermont duo of Sarah Smith and Zach Phillips, now of Brooklyn, who write synth-driven little nuggets of experimental pop that push, drag and shake you through a half-dozen or so emotional scenarios in the generally less than two minutes it takes them to sing a song. A little funny, a little harrowing. No known nudity. (And Fat Creeps is a solid retro-pop/grrl punk trio from Lynn. Minor-chord garage rock with plenty of power. Who apparently didn’t break up this summer.)