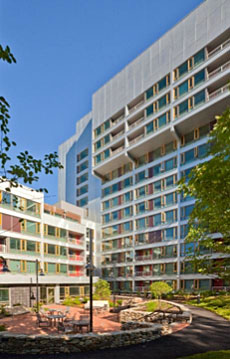 The Cambridge Housing Authority’s Lyndon B. Johnson Apartments gets a ribbon-cutting Thursday for its $32 million in improvements.

There are fancy, environmentally advanced rentals and condos being unveiled in Cambridge all the time, but the ribbon-cutting coming Thursday is for top-notch green real estate with a surprise: It’s public housing.

There’s been upward of $250,000 in savings by dropping electric heating and switching to high-efficiency gas heating and installing solar panels – even while adding central air conditioning throughout the 177-unit building, according to authority figures. Beyond cost savings, the improvements reduce carbon emissions by more than 2,200 metric tons per year, the equivalent to the energy use of 403 U.S. homes.

The work also turned 69 studio units into one-bedroom apartments by enclosing balconies, and more than doubled the number of handicapped-accessible units. Each unit got Energy Star appliances, water-saving fixtures and cabinets and flooring from sustainable sources, and Russ said there were common-area improvements as well: refurbished elevators, entrances, community rooms and corridors, a newly designed outdoor courtyard and improved parking areas, walkways and site lighting.

“I am grateful for the tireless cooperation and efforts from our residents, staff and the many partners, whose collaboration made this unprecedented work possible,” Russ said. “The transformation of LBJ Apartments has set a new standard for CHA – a standard we will continue to use as we improve the remainder of our portfolio.”

The housing, at 150 Erie St., gets an opening ceremony with state Reps. Jay Livingstone and Marjorie Decker, federal Housing and Urban Development Regional Administrator Barbara Fields as well as other political, financial and development movers and shakers. 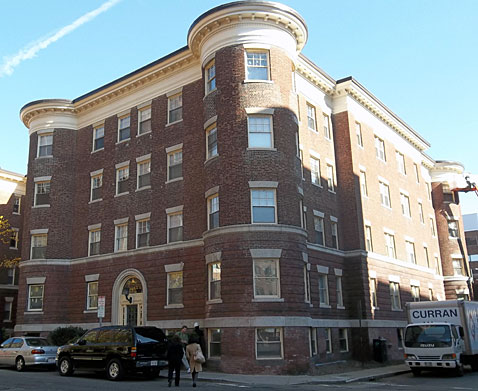 Chapman Arms in Harvard Square is renovating and preserving 25 units as affordable with $11.8 million in bonding.

MassDevelopment, the state’s finance and development agency and one of the partners in the apartment work, has already moved on to a new Cambridge project helping lower-income residents: issuing $11.8 million in tax-exempt bonds to acquire and renovate apartments at Chapman Arms, a 50-unit apartment building in Harvard Square, preserving them as affordable-housing units. Homeowner’s Rehab, the project sponsor, said 25 units will be preserved as affordable.

“Chapman Arms is a critically important development to the city of Cambridge both as a 40T Preservation Project and also due to its location in Harvard Square, where there is very little affordable housing,” said Peter Daly, Homeowner’s Rehab executive director. “The residents are very happy to have their homes preserved.”

Homeowner’s Rehab was founded in 1972 by residents and says it has since developed 1,500 units of housing. It owns almost 1,250 apartments and 55,000 square feet of commercial space in Cambridge and operates a foreclosure prevention program and The Home Improvement Program, which provides low-interest home improvement loans and technical help to homeowners who can’t afford maintenance on their property.