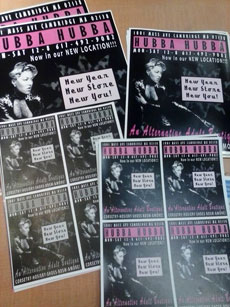 Hubba Hubba staff have made posters to publicize the fetish store’s move to 1001 Massachusetts Ave., near Harvard Square.

Fetish store Hubba Hubba is back in business – just over a couple of months after closing and a half-mile from its old Central Square location.

“We’re so happy,” founder and owner Susan Phelps said late Friday, preparing for a Saturday grand opening that would welcome back customers with late afternoon champagne and possibly a live model for some of the store’s leather and latex fashions.

The new store is at 1001 Massachusetts Ave., near Harvard Square, Cambridge College and The Cellar restaurant and bar.

“We’re down a flight of stairs, which gives it a flavor of the late ’80s in London,” Phelps said.

That’s a good era for the store – it was at its Central Square location for 16 years but actually opened in the late 1970s, making a fast transition from vintage to punk to its current stock of sex toys and goth and fetish clothing and gear.

The store was forced to relocate after its landlord, The Dance Complex, realized that the 534 Massachusetts Ave. storefront occupied by Hubba Hubba could be used as a street-level presence and class space to shrink a long waiting list of students. Phelps was first asked to move by Oct. 5, then given a month’s reprieve so she could work through the store’s Halloween busy season.

Just before New Year’s she signed a lease at the new location for five years with a five-year renewal option, Phelps said. Staff started moving in stock just after New Year’s, but were delayed by bad weather. They’ve been in soft-opening mode ever since, serving customers who wandered in but not publicizing the exact location.

“It’s not quite as big as what we had,” Phelps said. “We’re still trying to figure out how to squeeze it all in.”