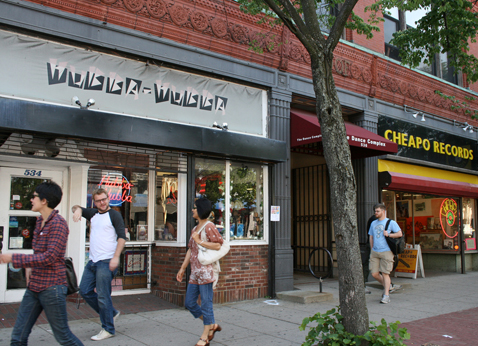 Hubba Hubba may have to leave Central Square after 16 years at 534 Massachusetts Ave. (Photo: Sid)

Do you know where you’ll be buying your leather, latex, restraints and sex toys come November?

No, really, do you? Because Susan Phelps, founder and owner of Central Square’s Hubba Hubba, says she needs to be out of her 16-year home of 534 Massachusetts Ave. as of Nov. 5, and she’s not sure where to move.

“We’re looking like crazy for other spaces,” Phelps said Sunday. “We’re looking at Davis, Inman … if anyone has any qualifying space for rent, let us know, we’re desperate.”

The cause of the move is the Dance Complex’s need to expand, Phelps said, resulting in the news two weeks ago that she had to vacate by Oct. 5 – a date she pleaded to delay because Halloween is her busy season. Phelps has been a tenant at will of the Dance Complex, founded in 1991 to save the historic Odd Fellows Hall, for the past few years.

“There is no animosity toward Hubba Hubba. They have been great tenants,” said Peter DiMuro, executive director of the Dance Complex.

But the complex is not just at a moment when it serves 2,000 people a week and has a waiting list of teachers and dancers needing rehearsal space. In addition, “the constant mantra we keep hearing is, ‘Oh, we didn’t know you were here, we hear the drums,’” DiMuro said. It was only recently that a light bulb went off, leading to a plan to expand to a ground-level storefront.

“The goal is to seize the opportunity and have a presence at street level … so people get that instant visual thing,” he said. The complex plans a greater presence on the Web as well.

It’s a blow for those who think of Central Square as an eccentric place of communist bookstores, vintage clothing and Weirdo Records. While all those categories remain, in January the square lost Buckaroo Mercantile, a shop of kitschy and mainly retro odds and ends, which opened around the corner on Brookline Street the same year as Hubba Hubba, continuing its 35-year evolution from vintage to punk to goth and fetish clothing and gear. (Harvard Square is experiencing its own moment of change, saying goodbye to Colonial Drug after 66 years on Brattle Street and to the Dunkin’ Donuts slightly relocated after its use in the 1997 film “Good Will Hunting.” It opened in 1971.)

Phelps is looking for between 1,600 and 1,800 square feet, and most of what she’s been looking at in her sudden hunt for a home has been about half that, she said – coincidentally, the outcome of ManRay finally being able to return to Central after losing its lease to residential development in 2005. The notorious fetish nightclub expects to re-open on Massachusetts Avenue in a 5,000-square-foot former video store that’s about the third the size of its one-time home on Brookline.

While retirement is not far from Phelps’ mind, “I love the store,” she told a film crew from Boston University last winter. “I would love the store to continue as the creation that it is … I don’t want it to be all over.”

She pointed out to potential landlords that as the founder and owner of Hubba Hubba since 1978 – when it spent a year’s run in Porter Square – she’s reliable.

“The store’s got longevity going for it,” she said.

Update on Sept. 25. 2013: The Dunkin’ Donuts will not be closing, according to The Harvard Crimson.