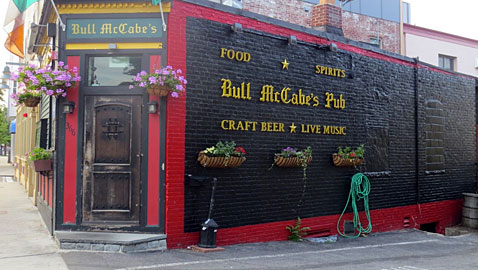 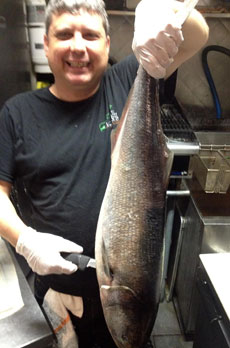 The Dubliner Pub in Porter Square is being replaced by McCabe’s, an offshoot of Somerville’s Bull McCabe’s, with a stronger emphasis on fresh food. (Photo: Bull McCabe’s)

Changing Porter Square’s Dubliner Pub into a Cambridge branch of Bull McCabe’s is more than a change of name, owner Brian Manning said Tuesday. The sports bar atmosphere and its many televisions are out, to be replaced by a new menu with an emphasis on small plates with fresh ingredients.

That means it won’t be a duplicate of the Somerville Bull McCabe’s either, an Irish pub with burgers, sandwiches and classic Boston entrées such as shepherd’s pie, schrod and fish and chips.

The dish Manning mentioned when asked to look ahead at the menu for 2046 Massachusetts Ave., which was the Porter Cafe and Spirit Pub before becoming the Dubliner last year, is Korean-style pork belly on lettuce with cucumber shoots and a lime glaze.

To make it happen, he told the License Commission before winning approval for his 84-seat restaurant to be open daily from 11 a.m. to 1 a.m., he is replacing the Dubliner Pub kitchen staff entirely and taking out all of its freezers. That might still make his vision for the menu seem optimistic to some. “It’s a small kitchen, but it’s not a small kitchen to me, because my kitchen at Bull McCabe’s in Somerville is about the size of this table,” Manning told the commissioners, later describing the Somerville kitchen as also roughly the size of an elevator interior.

The menu of the 366A Somerville Ave., Union Square, Bull McCabe’s has about a dozen appetizers and small plates ranging in cost from $6 to $15, salads for $9 or $10, burgers and sandwiches from $10 to $13 and entrées for $16 or $17, along with some market-price meals and  several vegetarian options. Yelp comments are generally positive for such dishes as chowder, steak tips and burgers and their prices, and the establishment as a whole averages 4.5 stars out of five from 97 reviews.

The Somerville site has live music, but the Porter Square site will not, said Manning and attorney James Rafferty.

No sports, no noise

They expected a few weeks’ worth of dining-area minor renovations to be done before the Alcoholic Beverages Control Commission affirms the transfer of the Dubliner’s license to the new restaurant. The Dubliner jukebox is already gone, as is the cable subscription that piped in sports, pay-per-view events, Ultimate Fighting Championship bouts and wrestling, they said. Two televisions will remain and there will be a “few” projectors for major sporting events.

Rafferty identified Temple Bar, on Massachusetts Avenue between Harvard and Porter squares, as a model for McCabe’s, and in more than one way: Like Temple Bar, the Porter Square restaurant has windows that are meant to open wide in good weather, but unlike Temple Bar it neighbors single-family homes and senior housing.

Long-running noise issues with Spirit and the Dubliner had neighbors worrying about the windows at the future Bull McCabe’s – especially since Manning was a manager at Spirit more than five years ago. But Rafferty and Manning convinced the commissioners that the change in emphasis would be enough to keep noise down, and Rafferty assured that if “there was a problem, we’d ratchet it back” even without an order from the commission, closing the windows at the Dubliner’s standard 9 p.m. instead of McCabe’s requested 11 p.m.

Aside from the noise concerns, neighbor Janet Malenfant said, “we’re happy to have a good restaurant.”

McCabe’s wouldn’t be asking for outside dining until after a year or two on, after it had built up a good reputation in the neighborhood, Manning said.