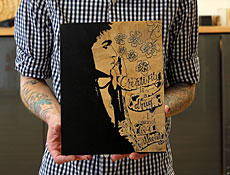 This time the future isn’t in Kendall Square – it’s in Central Square, replacing a Get in Shape for Women gym franchise.

That’s where danger!awesome is expanding, leasing about 2,000 square feet at 645 Massachusetts Ave. to add to its current 500-square-foot shop at 10 Prospect St., some 30 steps around the corner.

Cambridge and Kendall Square are known as innovation centers for high-tech and life sciences. This business, founded by Massachusetts Institute of Technology grads Ali Mohammad and Nadeem Mazen – as of November, also a city councillor – combines three other powerful trends in business technology: the DIY “maker” culture newly powered by small, high-tech tools such as  3-D printers; the movement away from ownership seen in everything from car-renter Zipcar and apartment-swapper airbnb to business incubators and co-working spaces such as Kendall’s Cambridge Innovation Center and Central’s Workbar; and the crowdfunding revolution led by Kickstarter.

Danger!awesome is a laser-cutting, laser-engraving and 3-D printing workshop where customers can come in and etch pretty much any design onto any object without having to buy their own gear, and the renovation and equipping of the new space is reliant on a monthlong, $35,000 crowdfunding effort that already looks like a success. Only a week in, the Kickstarter had 331 backers putting the fundraising past the $21,000 mark, or just over 60 percent at its goal.

“We’ve rocketed into Kickstarter’s most popular projects, we’ve been featured as a Staff Pick and we’re getting some great press on the high-tech, hands-on educational message that we want to put out there in the world,” the founders said in an update to their backers.

Surprisingly, as of Thursday only about 10 backers had contributed money in the categories that would get them slices of OK Go! toast – “precision-toasted bread” that were single frames in the band video co-directed by Mazen and Mohammad. The toast was also an inspiration for the launch of danger!awesome, since when production wrapped, they saw the leftover laser cutters as a chance to build a small community fabrication shop from the ground up. The video that started it all:

The new space will have 30 new workstations and classroom space, making for a flexible environment that can handle projects big or small and host group trainings and events, leaving the Prospect Street site as a storefront for retail and made-to-order commissions, said Amanda Levesque, danger!awesome’s design director and crowdfunding manager.

“It’s still fairly modest for a maker space,” Levesque said of the former gym. “We looked into bigger locations, but being hyper-accessible to Greater Boston – on the doorstep of the red line and Central Square’s eight bus routes – was more important to us than a luxurious floor plan outside of town. We wanted to make sure our members could stop by on their lunch break and make something with us, start to finish. That’s how open and accessible we want to be.” 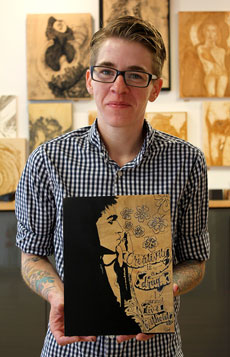 Elann Hathaway, a danger!awesome senior technician and instructor, shows a piece of her laser-cut artwork.

There’s also a stretch goal for the fundraising: $60,000 for advanced computer-controlled cutters for jewelry and other uses, a powerful fiber laser and a fume hood that would take the shop’s production capabilities “to the next level.”

Either way, danger!awesome moves in Feb. 1 and plans a grand opening March 15, having “been looking into expanding for a while now to give a permanent home to the art and engineering education and outreach programs that we already do,” Levesque said, saying the new location “felt right because it could operate in tandem with our existing location, without sacrificing our accessibility.”

“It’s operated by the same landlord as our current space. That’s what originally put it on our radar,” she said. The deal was in place mid-December, with the founders excited to find a way not just to grow the business, but to allow customers to grow their skills. Levesque said of the two spaces:

The retail shop invites anyone and everyone to become a maker, even if that means they’re adding their own touch to something they already own (like a watch engraving, for example). The workshop is for the heavy-duty makers who want to work on larger-scale projects or build from scratch. So you can see how these two spaces will operate together in tandem. Over the years, we’ve found that many people who walk through our door for small, one-off projects get a taste of what it’s like to make and end up getting hooked on it in a big way. Those people could transition from using our retail services to becoming a fully trained member in our workshop with the skills, the inspiration and the confidence to make things on their own.

“The good news is that because the programming in each space will be so different, our members shouldn’t have to change location frequently over the course of the day,” Levesque said.

Still, the locations are tantalizingly close and frustratingly not connected.

“We’re looking into ways to change that, but unfortunately, this Kickstarter won’t raise enough funds to take care of huge renovation moves like adding a new internal staircase. We need to get new tools and a dedicated classroom space down there first,” she said. “But one day!”

The Kickstarter campaign, which has rewards for funders starting at as little as $5, is here. The danger!awesome website is here.

This post was updated Jan. 24, 2013, to correct the identity of the person in the photo.