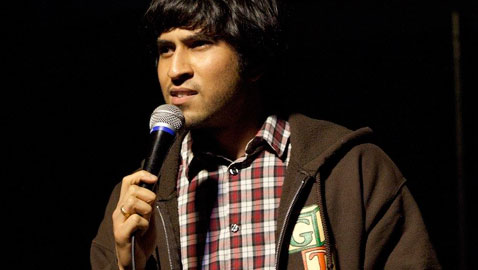 TGIM, or whatever. If the idea of starting another workweek is getting you down, why not start it off easy with some comedy tweets from local comedians? The past weekend included some occurrences of note, such as the Super Bowl and its halftime show with Bruno Mars and the Red Hot Chili Peppers.

Alingon Mitra is a Worcester native and Harvard grad who won last year’s Boston Comedy Festival (and gave away the $10,000 prize). He appears in the 8 p.m. Wednesday show at The Comedy Studio, 1238 Massachusetts Ave., Harvard Square.

The other big news of the weekend: The death of brilliant actor Philip Seymour Hoffman.

While we’re on the theme, Mickey McCauley had a thought about mortality:

McCauley is a Baltimore transplant and Boston comedian who posts even more great comedy tweets on his Post-ambles blog each Fridays.

If you love what you do, you'll never twerk a day in your life.

Scott McLaughlin is a Cambridge comedian appearing in the 8 p.m. Feb 9 show at The Comedy Studio, 1238 Massachusetts Ave., Harvard Square.

I saw a shooting star of david, so I made a jewish.

Niraj Shah is a regular at clubs in Boston such as The Comedy Studio in Harvard Square, ImprovBoston in Central Square, Dick’s Beantown Comedy Vault, Nick’s Comedy Stop and other rooms across New England. His website and calendar are here.

Whats the last line to the Cops theme song? Sounds like Bad boys bad boys watchagonna do watchgonna do when shoung blong loing doung for you

James Creelman is a regular at such clubs as The Comedy Studio, the Rhode Island Comedy Connection, Joker’s Wild, ImprovBoston, The Comedy Zone and Catch a Rising Star.