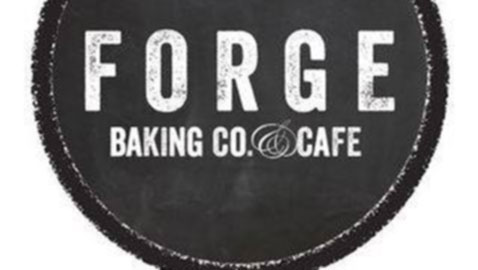 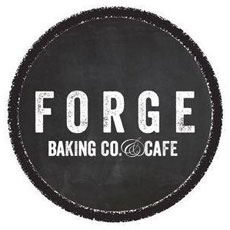 The team behind the upcoming Forge Baking Co. in Somerville released this image of potential branding for café.

Although the opening of the Forge Baking Co. is months away, the record of the team behind it – Jennifer Park and Tucker Lewis opened Diesel in Somerville’s Davis Square in May 1999 and Bloc 11 in Union Square in October 2007 – inspires a bit more interest than the average new bakery.

The team has a long-term lease (with an option to extend) on a 4,900-square-foot space at 626 Somerville Ave., Somerville, near the Porter Square T stop and between Davis Square’s Diesel and Union Square’s Bloc 11. About 2,000 of the square footage is needed for kitchen and production space, which can’t be finished or opened without the deck oven being built to spec in Italy.

As a result of that and other variables, the Forge opening date is being kept loose – late summer or early fall, with a soft opening “before we officially unlock the doors” and a few preview sessions at Diesel and Bloc 11, the team said.

The idea of having a bakery began around the time Bloc 11 opened. The pressures of launching a second site delayed the project, but also meant time for co-owner Justin Folkers to join the team, providing baking know-how that made Forge possible, they said.

Forge is expected to be a 50-seat cafe and full-service bakery making everything from pastry and cookies such as macaroons to a variety of breads, including baguette, that will be leavened naturally and made from organic grains. “We have wanted to bake our own baked goods for years now,” the team said in response to emailed questions. “A huge driving force for Forge really has been to bake our own products and have creative control over all of our food.”

“We develop our sandwich menus with consideration paid to what breads are available from our vendor. Having a bakery to collaborate with means that we can now develop a bread to pair perfectly with the other ingredients of a sandwich,” Folkers said. “We’ve never had that level of creative control before, and we’re really looking forward to exploring the possibilities that this brings us.” 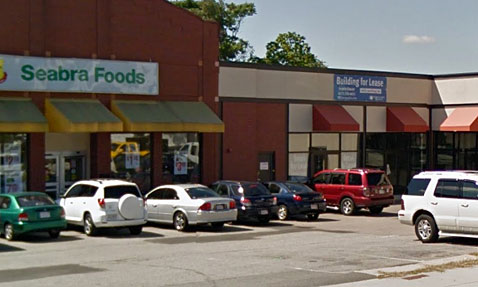 The eatery is going into 626 Somerville Ave., near Porter Square, near a grocer’s space that has been turned into a school of dance. (Photo: Google)

The team expects to be baking for all three locations within the first year, but to keep getting items such as wraps and bagels from outside vendors. (Intelligentsia Coffee will also stay the source of the shops’ brews and take-home grounds.) And just as the menus at Diesel and Bloc 11 have been kept separate, “we will be offering pastry and bread at Forge that won’t necessarily be available at either of the other stores. So while Forge will be acting as a commissary for both, it will remain its own entity with its own personality,” Folkers said. “The savory menu will be quite different and will lean on the fact that the back of the house at Forge provides possibilities that simply don’t exist at either Diesel or Bloc.”

The site has a parking lot – which will make it unique among Diesel and Bloc 11 but was not the feature that sold the team on the space. It was the ceiling, which reaches as high as 26 feet in the back of what’s expected to be the retail/seating area, and its exposed beams “that we fell in love with when we first visited the space” in the spring of 2013, Folkers said. Because the only natural light comes in from the north-facing front, the space will get skylights or other elevated windows to lighten the back and accentuate its architectural elements. “You can also expect to see plenty of locally sourced reclaimed lumber throughout, custom crafted furniture by local artists, creative urban landscaping and hand-painted custom signage,” he said. 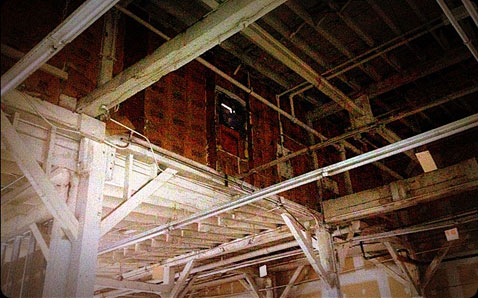 One of the appealing features at 626 Somerville Ave. are ceilings reaching up to 26 feet, said one of the principals behind the planned eatery. (Photo: Forge Baking Co.)

Forge’s hours will be shorter – more like Bloc 11’s closings of 7 or 9 p.m. throughout the week than Diesel’s 11 p.m. closings – but won’t be decided until the team gets a sense of its customers’ habits.

“We aren’t going into this with a set demographic in mind,” Folkers said. “Our hope is that Forge will bring people together from many otherwise disparate groups. Bakeries have a unique ability to do that.”

Participation from the community

Diesel’s longer hours and booths allow Tufts students and other academics and wonks to linger for long hours, studying, writing and even programming. In addition to shorter hours, Forge will likely not have booths, Folkers said. Instead, visitors can expect seating that encourages group gatherings, like the large tables at Diesel, along with “some individualized single seaters, some bar seating and a handful of two- and four-tops.”

“With the number of seats on offer we are hoping to give people the option to grab and go or to linger for a time,” he said, and there will be “ample” electrical outlets so people with laptops can plug in; Wi-Fi options, the team said, are being reviewed, and will probably be handled differently than the paid Internet at Bloc and Diesel, provided by a Concord company called GuestBox.

Park and Lewis said they expected to invite a lot of participation from the community in some form, such as events, talks or workshops, and that once things have settled they would think about running classes on how to make bread and pastry at home with high-quality ingredients.

“It is always exciting to become part of a new neighborhood,” they said in an email, “and we are very excited to be in Somerville again.”