Developer at NorthPoint pushes for shorter shutdown of T, adds own link to orange line 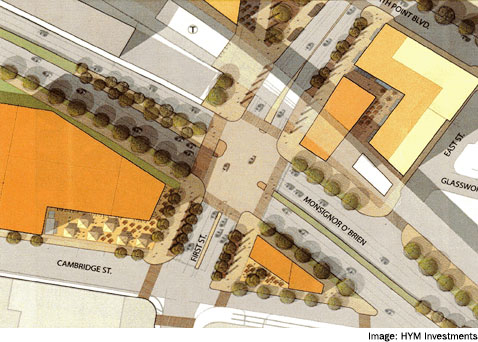 Developer at NorthPoint pushes for shorter shutdown of T, adds own link to orange line

The developer of NorthPoint is as eager as the public to see the green line extension happen, especially with a 355-unit apartment building opening for tenants in 2015 – a year before the Lechmere stop closes and two years before it is relocated and opens again across Monsignor O’Brien Highway to the east.

There is no firm timeline from the state Department of Transportation’s Green Line Extension team, but officials’ statements suggest there could be a roughly 17-month gap when T commuters will have to use shuttle buses instead, the third major service disruption in a decade. Joe Pesaturo, a spokesman for the Massachusetts Bay Transit Authority, said the agency envisioned a shorter shutdown, roughly a year of bus service.

“Every effort is being made to minimize the green line shutdown period,” Pesaturo said.

HYM Investments, which is developing the 44-acre neighborhood of offices, lab space, residences, parks and retail known as NorthPoint, wants the green line in place to serve not just the 355 luxury units being built, but the existing businesses and 2,000 residential units already served by Lechmere, said Tom O’Brien, founding partner and managing director of the Boston firm.

The station is scheduled to start running in NorthPoint in mid-2017, along with a spur that takes riders to Union Square and a Washington Street station that will lead to more green line stops out to Medford. The state has said those three stops are funded. But Pesaturo said last last month that the finish date assumed the Federal Transit Administration agreed to let certain aspects of the project go forward before a full funding grant agreement was in place for the rest of the $1.3 billion, eight-station project. “The sequence and duration of the GLX construction activities are completely unrelated to any schedule requirements of the private developer,” Pesaturo noted.

“We’re pushing them as well, obviously,” O’Brien said March 6 of the green line team. “They’re hearing loudly and clearly that time should be as short as possible.”

The problem is the raised stretch of track before trains reach the station. That viaduct starting at the Gilmore Bridge needs to be removed and the tracks redirected toward the new station, and that work is to be followed by several months of testing called for by state regulation. Pesaturo said the steel viaduct has “rather significant structural deficiencies” that makes rehabilitation less cost-effective than tearing it down and starting over.

Some work in the area can’t be done until the viaduct is torn down, including the demolition of the current Lechmere. Some of the existing structure will be salvaged and incorporated into the construction, Pesaturo said.

O’Brien was confident the agency “was hearing loudly and clearly that time should be as short as possible. They’re totally focused on how quickly the extension is put forward and are trying to collapse that time as best they can.” But he encouraged the public, HYM and state to keep working together to find ways to make it shorter and more efficient.

“We all need to keep up the encouragement,” he said. “We need the service and we need the Green Line Extension to move forward at a good pace. It’s in everybody’s interest.”

NorthPoint will be better connected to East Cambridge as the raised Monsignor O’Brien Highway becomes the street-level Monsignor O’Brien Boulevard and First Street is extended, letting people walk, ride bicycles or drive directly to the new T stop and surrounding retail area. HYM, which is also responsible for improvements to Monsignor O’Brien and some side streets from beyond Third Street to the Museum of Science, plans for the retail square to be finished in 2018.

First Street now stops at the current Lechmere station, forming a T intersection with Cambridge Street. HYM plans show it cutting the current station in two, including a smaller triangle to the south that could be used for retail and dining (the residents’ plan imagined it as a hotel) and a larger section to the north that will become residential space with some retail. There is no schedule for construction of the residential tower replacing Lechmere. Filling out NorthPoint itself – which includes adding water and sewer infrastructure in addition to simply putting up several more buildings, including a grocery store – could take up to 15 years depending on the direction of the economy and real estate market, O’Brien said.

The larger part of the old station could host the year-round public market proposed by East Cambridge residents in 2009, or the public market could be hosted in NorthPoint on a block cater-corner across a future First Street/Monsignor O’Brien Boulevard intersection. HYM had no preference, O’Brien said.

The development company was taking a step on its own to make NorthPoint even more friendly to public transportation. Noting that many workers walked over from the Community College orange line stop in Charlestown, O’Brien said the company would put up access to midway across the Gilmore Bridge to save workers from having to go all the way to the end, especially in months of bitter cold, wind, rain and snow.

“For the first time, people will be able to make a really convenient connection from Community College,” O’Brien said. “It’s not a direct connection, but it’s about half the walk.”