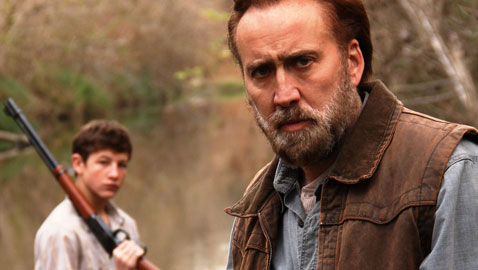 Like Jude Law’s Dom Hemingway, Nicolas Cage’s Joe is an angry, feral mess, not to be tangled with. He’s also a puppy on the inside, should you catch him when he’s sober. That’s the blessing and the curse of “Joe,” a character study in which the character is so all over the road that each time you think you’re getting to know him, something knee-jerk and nonsensical comes out and throws you. 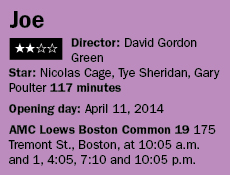 Director David Gordon Green’s been a bit all over the map himself, from the small indie gem “George Washington” (2000) to the raucous stoner mayhem in “Pineapple Express” (2008) and most recently, “Prince Avalanche” (2013). “Joe” begins on a promisingly sober note as Gary (Tye Sheridan, filling a role similar to one in “Mud”), a youth of poor means, takes up a hatchet on a brush-clearing gig for Joe, whose reputation as an explosive ex-con is known throughout the depressed Texas enclave. Gary’s amid a lot of people who look like they know Joe from his days behind bars, but they’re all hard-working now and focused.

Joe’s pretty focused too, until he drinks too much. The rub comes in Gary’s alcoholic father (Gary Poulter) who goes by the moniker G-Dawg. He’s both complex and a caricature, and perhaps the most alluring and annoying aspect of “Joe.” In one scene he’s so drunken he can’t stand up and in another he’s bashing in a vagrant’s head. It’s humorous too, to see the motley hillbilly with scraggly white beard and amoral ethic bust some rap moves, but to what end?

Meanwhile, Joe’s worked up about the new rookie on the police force who impedes his drunken sojourns to the local brothel. And when a big German shepherd won’t let Joe across the foyer of the broken-down bordello, Joe remedies the situation by bringing his own dog (a ripped pit bull) to the fight. It’s one of the film’s grimmer scenes, bound to turn viewers’ stomachs nearly as much as G-Dawg pimping out his mute daughter.

Not much is pretty in the backwoods world Gordon Green has carved out. It’s a quagmire of shit with Gary shining through as the conflicted innocent, hard-working, attuned and full of promise, yet ever on the precipice of being sucked under. The plot, despite some sudden and strange turns, moves in a fairly predictable fashion with the father-son conflict and Joe’s burgeoning bond with Gary orbiting each other with the inevitability of a cataclysmic collision. Cage, Poulter and Sheridan pour a lot into their faintly drawn characters, and Gordon Green, while he does take the viewer into a new realm (though anyone who’s seen “Mud” will be feeling déjà vu) makes the journey end up being more of baroque travelogue than a soul-searching revelation.