‘Mud’: Pulpy crime noir, love story and coming of age, all found along a river 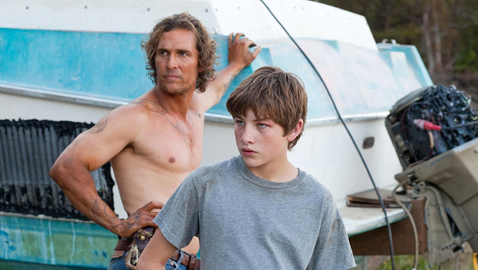 ‘Mud’: Pulpy crime noir, love story and coming of age, all found along a river

The titular substance usually connotes filth, squalor and entrapment like quicksand. About the only positive spin I can think of are mud baths in a health spa. But I digress. Mud acts as an effective tapestry in Jeff Nichols’ follow-up to his doomsday preparer saga, “Take Shelter.” It’s the name of the arcane protagonist (played with vigor and game by Matthew McConaughey, whose trademark southern drawl is aptly perfect for the Arkansas setting), a metaphor for the sticky situation he’s in and can’t get unstuck from, and it’s everywhere in the Arkansas Delta where many of the characters live in ramshackle houseboats and eke out a living pulling fish, pearls and salvage from the silt-lined bed of the mighty Mississippi.

Like the olio of treasures found at the river’s bottom, “Mud” is a lot of diverse things compressed into one. It’s a southern gothic, a pulpy crime noir, an account of a fading way of life, a contemplation on love and most of all a coming of age tale that evokes shades of Tom Sawyer and Huck Finn. As Ellis and Neckbone, the proverbial Twain tandem, Tye Sheridan – one of Brad Pitt’s lads in “The Tree of Life” – and newcomer Jacob Lofland imbue the film with a sweet innocence and impish teen know-how.

Neckbone lives with his uncle (Michael Shannon, who starred in “Take Shelter”) and never knew his parents. Ellis lives in a dingy but cozy floating shack, and his parents are on the verge of splitting. The two find solace in each other and their mini adventures. Their latest involved the rumor of a boat lodged high up in a tree on an island after a recent flood. The rumor turns out to be true, and the boat happens to be where they meet Mud, scraggly, starving, feral and needing their help to get food. He can’t set foot in the mainland, because he’s a wanted man. 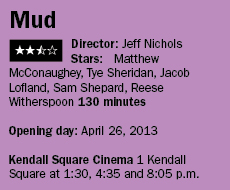 Smooth-talking and languid, Mud’s originally from the area and knows the river way’s ins and outs. His return is not so mysterious: He’s come back to rendezvous with Juniper (Reese Witherspoon), the love of his life and the reason he’s wanted in the first place – Mud killed the man who took Juniper away from him and subsequently beat her.

The boys reluctantly agree to help, bringing him food, but then the task becomes one of supplies to get the old pleasure cruiser out of the tree and seaworthy. The plan has Mud slipping down the river and into the Gulf of Mexico without the authorities knowing and with Juniper, who’s also returned to town and checked in at a seedy motel.

The waters get more roiled when the father of the man Mud killed (Joe Don Baker) sends a posse of hit men to take out Mud and  Juniper begins to act on inexplicable and  destructive impulses.

“Mud” may be driven by Mud and Juniper’s plight, but the heart of the film is the bond between the two boys from humble means and broken homes as they covertly scavenge boat parts and run letters to Juniper. The subtle subplots, with Ellis falling for an older girl and Sam Shepard as a Boo Radley-esque character across the water from Ellis’ house, pay off well, but the bigger conceit built around the unbreakable love between Mud and Juniper never feels genuine enough to justify the action. It would seem a major flaw, but like the slow lazy swirls of the chocolate Mississippi, it just drifts on by.

Nichols has a purposeful pacing that at unexpected turns erupts into bursts of extreme violence (be it emotional or physical). It’s much in the way masters Melville and Peckinpah orchestrated, though he doesn’t quite have those directors’ sense of character and continuity. The one thing Nichols, here and in “Take Shelter,” seems naturally adept at is eliciting rich and robust performances from his actors. Lofland and Sheridan shoulder a big load and shine. You can expect bigger things from these two in the near future.