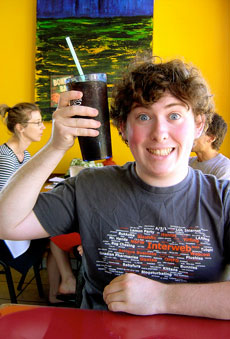 A 2012 order to limit the size of sugary drinks in restaurants has failed to win support from Cambridge’s Food and Fitness Policy Council. (Photo: Jayne Vidheecharoen)

Remember the move to limit the size of super-sweetened drinks sold in Cambridge restaurants? Former mayor Henrietta Davis proposed the idea almost exactly two years ago, following the lead of New York City. And two other councillors, also no longer in office, said they’d push to have it adopted, despite initial misgivings of public health officials.

Now an advisory health committee has panned the notion officially. The Food and Fitness Policy Council has concluded that restricting large-size sugary drinks and sodas is “not appropriate for Cambridge at this time,” Claude-Alix Jacob, Chief Public Health Officer, reported to a Cambridge Health Alliance committee Monday.

The fitness council didn’t say why it wasn’t appropriate, but Jacob mentioned “legal quagmires” that snared New York when its Board of Health proposed a similar measure with the backing of then mayor Michael Bloomberg. A judge barred the city from enforcing the rule, and the city is appealing.

Cambridge does have “municipal policy around healthier options,” Jacob said. The advisory council, which gives advice to the city manager, recommended that the city develop healthy food policies such as vending machine standards and that the advisory group talk to the restaurant industry about “promoting healthy beverage choices and tap water.”

The panel also favored pushing for action on super-sized sugary drinks at the state or federal level, including regulation and taxes.

Health experts, including Harvard public health professor Walter Willett, a Cambridge resident and a major proponent of a Cambridge regulation, have said big, over-sweetened sodas and drinks are a major cause of the growing prevalence of obesity and diabetes. Others have questioned whether regulating drink size will reduce consumption, though.

After Davis proposed a study of a size limit in June 2012, the measure went to the advisory group. Six months later the City Council’s Community Health Committee held a hearing on the proposal.  The restaurant industry signaled opposition, Willett testified in favor and the nutrition coordinator for the city’s public health department expressed doubts about the effectiveness of size limits.

It was at that hearing that then committee chairwoman Marjorie Decker and councillor Minka vanBeuzekom called for adopting a regulation. Decker is now a state representative and vanBeuzekom was not reelected.

Jacob said the Food and Fitness Policy Council recommendations are in City Manager Richard C. Rossi’s office. It will be up to Rossi when to send the report to city councillors.