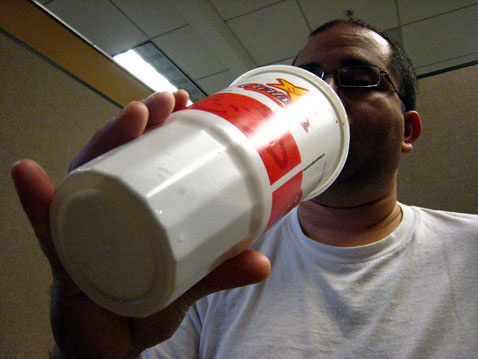 Despite questioning from business representatives and some skepticism from city health officials at a public hearing Wednesday, two city councillors said they want the city to limit the size of sodas and other super-sweetened drinks sold in restaurants.

Councillors Minka vanBeuzekom and Marjorie Decker, head of the council’s Community Health Committee, said they favor some sort of limit. “There’s no doubt in my mind this is the way to go,” vanBeuzekom said. Councillor Leland Cheung attended but did not express an opinion. Mayor Henrietta Davis, who called for an examination of the idea in June, said she favors a size limit but it should be part of “a much larger initiative” that could include promoting drinking tap water.

A representative of Massachusetts soft drink bottlers and distributors didn’t testify at the hearing but gave a written statement to reporters opposing portion control. “This oversimplified ban is unlikely to bring any significant change to the obesity rate but will instead harm local business and consumers,” spokeswoman Nicole Giambusso said.

One local restaurant operator who did testify, Steve Kurland, of the restaurants Za and Evoo, said a size limit won’t hurt him financially but warned that “we have to be careful about limiting” choice.

Meanwhile, the Harvard nutrition scientist who has been leading the campaign to curtail beverages laden with sugar called for banning drinks larger than 7 ounces – far stricter than the New York City 16-ounce limit that has drawn nationwide attention and a lawsuit by the beverage and bottling industry.

“We should seriously consider 7 ounces,” said Walter Willett, head of the Department of Nutrition at the Harvard School of Public Health and a Cambridge resident, in an interview after the hearing. “That’s the right amount.” During the hearing, Willett said New York’s lid is “too high” to make an appreciable dent in obesity, diabetes and other ills linked to high consumption of super-sweet drinks. He recalled that the normal size of the Cokes he drank in his youth was 7 ounces.

“It worked for us and it could work for Cambridge,” Willett said.

As for concerns about limiting choice,  people who want more soda can always buy a second serving, he said.

“No benefits, only harm”

The hearing was called by Decker to discuss the issue, which is before her committee, although only the city health department has the legal authority to promulgate a rule limiting the size of drinks sold in restaurants.

Willett and Tufts medical school assistant professor Virginia Chomitz, invited to the hearing by Decker, laid out the scientific evidence that drinking a lot of sodas and other highly sweetened beverages contributes to the growing incidence of obesity and Type 2 diabetes. Type 2 diabetes is the most common form of the disease and usually begins in adulthood.

Josephine Wendel, nutrition coordinator for the city health department, agreed that the scientific evidence shows clearly that super-sweetened beverages affect obesity. The impact is greatest among nonwhites and poor people, she said.

But “it is unclear whether limiting the the size of beverages sold in restaurants will be effective” in reducing people’s consumption, Wendel said. And it might be harmful to adopt a limit because “it isn’t tested, and if it doesn’t work it could limit the ability to introduce other [new measures].”  It may also take away resources from other important public health programs, she said.

Idea “is going to move forward”

Wendel said her comments are based on a preliminary analysis and she asked for more time to have the department’s Food and Fitness Policy Council weigh in on the proposal. The council was established in 2011 to write food guidelines for public programs and expand access to good food and exercise in low-income neighborhoods.

Decker said her panel wants to work with the department, the food and fitness council and business representatives, including restaurant operators. They will be invited to a second hearing, she said.

At the same time, Decker said, “this is going to move forward. Nobody likes the idea of having their choice taken away,” but there is “a tradeoff” between individual choice and “the greater good” of the community.

Next story: Plan to limit serving sizes of sugary drinks doesn’t have support of advisory council