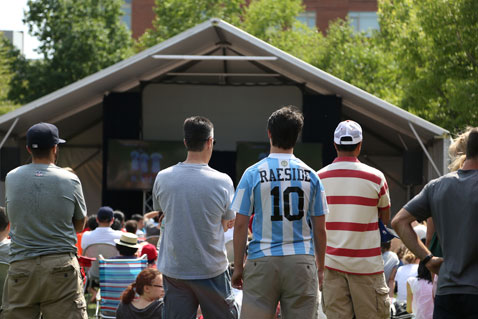 More than 200 people gathered at University Park Common near Central Square to watch the “Best Team vs. Best Player” game between Germany and Argentina in the once-every-four-years World Cup Final. At 2 p.m., still an hour from the kickoff, the seats with the best views had been occupied by some early birds.

The game was broadcast on five viewing screens, with watchers divided into four groups and the group in the center watching from two screens. To avoid the heat, most people chose to sit under outdoor umbrellas or in shade.

Germany and Argentina jerseys could be seen everywhere.

“I support Argentina, because my son is a big fan of Messi,” said Ejaz Nasser, a resident watching with his 8-old-son, referring to Argentinian player Lionel Andrés “Leo” Messi.

In addition to families, the game attracted international students. Javier Perez, from Spain, and Thais Farcelce, from Brazil, attend college near Cambridge and knew about the watching party from a friend. They said they love watching games with a lot of people.

“Compared to a bar, this place is less crowded, and is free,” said Danilo Limoeino, from Brazil. “I’m a Brazilian, but I really like the Germans’ performance this year. I think this is one of the greatest games.”

Germany beat Argentina with one goal in extra time.