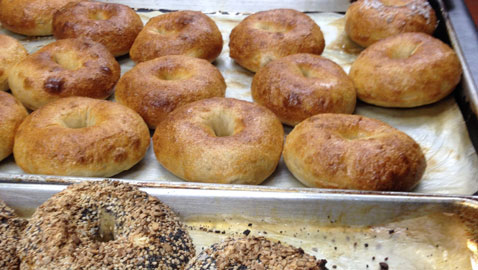 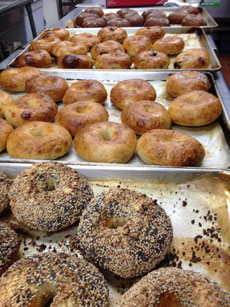 Bagelsaurus, coming to Porter Square in the fall, has been making nine kinds of bagels as a Brookline popup. (Photo: Bagelsaurus)

Porter Square is losing a Rosie’s Bakery and gaining handmade bagels that have been called the best in Boston. Bagelsaurus, a pop-up selling two days a week at Brookline’s Cutty’s, is due to open full time at 1796 Massachusetts Ave. in mid-September, with October a fallback date.

Baker, three-year Cutty’s manager and Bagelsaurus founder Mary Ting Hyatt was due to take care of paperwork in the next few days to take over the 1,100-square-foot, 19-seat space, which she told the License Commission on Tuesday would get light, mainly cosmetic renovations and a second convection oven.

Her old-school bagel-making methods have food writers enraptured, and her bagel flavors – whether on their own for takeout or in simple meals such as egg sandwiches – sell out quickly. Fans have resorted to crowdsourcing answers on how early they have to arrive at Cutty’s on a Friday or Saturday to guarantee getting Bagelsaurus product.

“It’s grown a lot. At first it was just trying to test my product … it’s been wonderful, and I’ve been fortunate to get a lot of great press out of that and a lot of support from customers,” but the goal was always to open a full-time, dedicated bagel shop, said Hyatt, a Cambridge resident and graduate of The Cambridge School of Culinary Arts in Porter.

But despite having bagels with gourmet qualities that stand out from the competition (Hyatt makes them from scratch, shapes them by hand, boils and bakes them fresh and describes them as lighter than New York and Montreal styles, but with “a shiny, crisp, crackly crust that has great chew”), the location begs the question: Why choose a shop with a Bruegger’s Bagels only three minutes’ walk away, let alone near a Dunkin’ Donuts and Panera Bread with bagels prominent on the menu?

“There’s a reason that Bruegger’s chose that location, and Panera and Dunkin’ Donuts. They did a lot of research. Someone told me when I was looking at spaces, ‘Follow the Panera.’ They’re basically doing the research for you,” Hyatt said. Locate in Inman, for instance, and you have great nighttime foot traffic but a potentially weak daytime, in addition to fewer transportation options, she said.

In addition, she’ll be near her alma mater culinary institute, where she’ll likely be recruiting some of the six employees she estimates will be needed at launch for a business she believes will include a lot of takeout and at least a dozen seats.

Prices and menus are in flux, she said, but she expected her existing bagel flavors to survive the trip: Plain, Everything, Sesame, Poppy, Sea Salt, Black Olive, Pretzel, Cinnamon Raisin and Seeded Wheat, with the Pretzel bagel being singled out as “special” and “delicious.”

In other food news …

The commission approved letting Inman Square’s Bukowski Tavern go dark for a longer-than-expected four months of renovations, holding its license inactive until reopening and pledging the license to First Trade Union Bank, which is providing $350,000 for the refurbishing to be paid back over five years. Bukowski closed July 17 after a dozen years in operation to get what a lawyer described as “basically a refresh” that will keep the shell but replace furniture and put “almost all new equipment” in the kitchen for new partner chef Brian Poe.

“It will be a little more open and fancier,” manager Suzanne Samowski said.

In response to a commissioner’s description of the work as “substantial,” Samowski replied, “It needs it.”

Bukowski managers aim to reopen by Thanksgiving, saying it was more “realistic” to add a month to the initial three-month estimate of renovation time.

“It has reduced our revenue … dramatically. That’s the main reason we decided to delay our payments,” lawyer Harry Nguyen said of H Mart, which opened in 18,000 square feet at 581 Massachusetts Ave. in April with a Sapporo Sushi & Ramen outpost as well as a variety of prepared sushi and other foods in the grocery section. “We are working very hard on a turnaround plan to bring in more revenue. We are making progress right now, slowly but surely.”