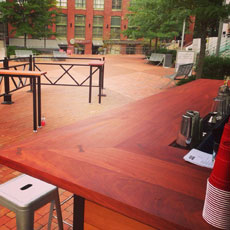 Kendall Square’s West Bridge won a patio license last year with the description of having a full menu in “a communal dining concept with two areas of 16 seats and tables.” (Photo: West Bridge)

West Bridge, a French restaurant in Kendall Square, lost its outdoor bar Tuesday, at least for now – more than a year after opening it with promises it would be for food, not drink.

Representatives of the restaurant showed up hoping to make its use official, but the three-member License Commission felt there were too many questions. Instead the patio bar has to shut down for the rest of the summer, with West Bridge returning Aug. 28 to the commission to win back approval.

West Bridge opened at 1 Kendall Square on May 2012 with 111 seats inside and 14 patio seats. Owner and manager Alexis Gelburd-Kimler came back in April 2013 to ask to expand onto a brick plaza below between it and such restaurants as Tommy Doyle’s and the Cambridge Brewing Co., adding 32 seats described as “full seating.”

That meant “a communal dining concept with two areas of 16 seats and tables” where groups of any size might be seated alongside people they didn’t know, but what was installed were two narrow tables and a similar shelf and one slightly larger table, for a total of four – all at a height suited for barstools or standing, said attorney William Ferullo, who represents the restaurant.

The restaurant has an overall capacity of 180, which West Bridge remained below even as it added the 32 patio seats, at which time Ferullo said peculiarly that “the restaurant seating and capacity really doesn’t change for this.”

He also promised the patio would be “for food service, meaning if someone wished to come in for a drink, they would have to go into the existing bar that’s inside the restaurant.”

But the patio has a standalone bar within its fencing, and during a visit before Tuesday’s commission meeting, a West Bridge hostess said there was no dining in the space. The patio is for bar service only, she said, save for a daily “project” that can be sampled there. The previous day’s “project” was a duck chorizo, she said. 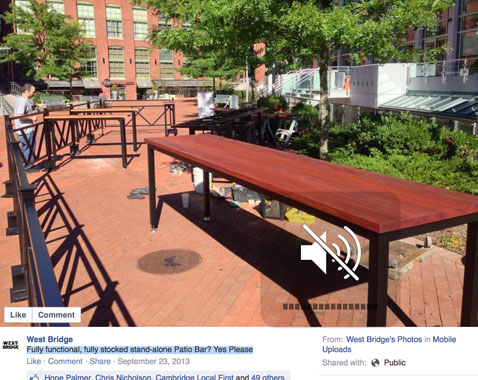 The three commissioners were unfamiliar with the transcript, but Ferullo said Tuesday that “we never requested a limitation” on bar service and he didn’t believe there had been one. And Gelburd-Kimler said the hostess had been incorrect, and the patio had a “shortened menu.”

She also reminded Ferullo and Gelburd-Kimler that the patio bar shouldn’t be open without the approval of the commission and the state’s Alcoholic Beverages Control Commission, and the attorney said it would be “discontinued.” It had stayed open despite West Bridge managers being summoned for the license alteration.

The standalone bar was installed after the first season in operation, when West Bridge managers experienced how hard it was to serve from the main kitchen, Ferullo said.

They made the change “without knowing it was an alteration” from the license, he said with apologies. “We didn’t know it was necessary to appear before the board” for the change.

Two members of the commission were missing for this hearing. Cambridge Fire Dept. Capt. Thomas Cahill sat in for the absent Chief Gerald Reardon, and Cambridge Police Dept. Superintendent Steven A. Williams sat in for Police Commissioner Robert C. Haas. Reardon was the only commissioner present for the April 9, 2013, approval.